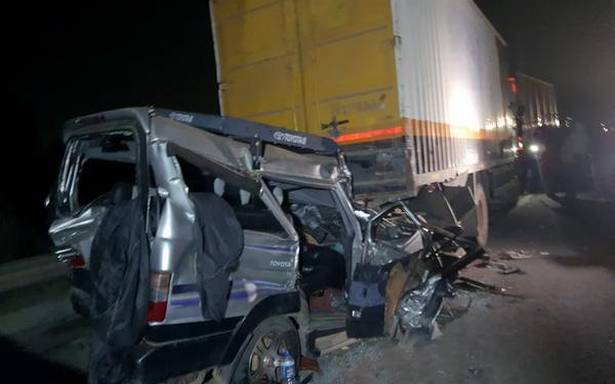 Traffic movement was disrupted on NICE Road that extended for over 4 kms.

Four people—three software sofware professionals and a school teacher— were killed in a serial accident when a truck rammed into their SUV on NICE Road near Kumaraswamy Layout on Friday night. According to the police, the accident occurred at around 9.30 p.m. when a Tamil Nadu registered truck rammed into their car with a Kerala licence. As a result, there was a collision involving two more cars and four trucks, where six people were injured.

“All four accident victims were between 25-30 years of age. The six injured–four in an SUV and two in another car–sustained minor injuries,” a senior police officer said.

“There was some minor road repair work on the stretch where the accident took place, and most of the motorists were driving slowly. However, the truck driver was driving rashly, which led to the serial accident. He escaped soon after the accident, and efforts are on to track him down,” the police officer added.

The deceased accident victims have been identified as Shilpa who worked in a private school as a teacher, and her friends, software professionals, Mohammed Fadzil, Abhilash and Jeena.

Traffic movement was disrupted on NICE Road that extended for over 4 kms. Senior officials visited the spot to supervise the investigation.