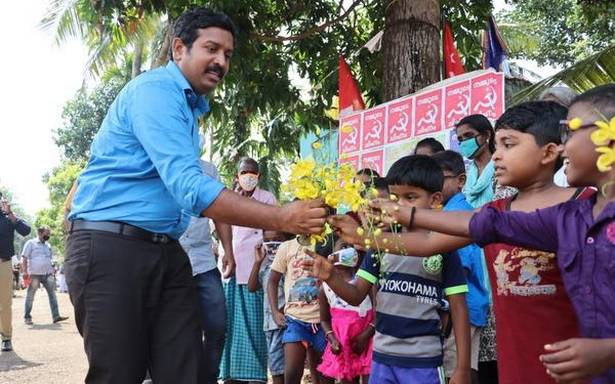 All eyes are on Kunnathunad where the electoral battle is four-cornered and everyone, from the ordinary campaign worker to candidates and residents, are contemplating what impact the Anna Kitex-backed Twenty20 might have.

Two-time MLA from the constituency and UDF candidate V.P. Sajeendran and a set of party workers power walk through the streets of Manayathupeedika in the Aikaranad panchayat of Kunnathunad, completing house visits on Tuesday morning. In the area dotted with rubber plantations, Mr. Sajeendran reminds women that the Mahatma Gandhi National Rural Employment Guarantee Scheme was introduced by a Union government helmed by the Congress. He tells them that the priority of the UDF government when elected will be to fulfil the promise of a minimum income of ₹6,000 to poor families.

Aikaranad was one among four panchayats (the others being Kunnathunad, Kizhakkambalam and Mazhuvannoor) where the Twenty20 won a majority in the local body elections.

Taking a break at a home in the panchayat, Mr. Sajeendran says that Twenty20’s welfare measures are selective. “People may have voted for the outfit in the panchayat elections, but they will not now,” says the MLA.

P.V. Sreenijin, the LDF candidate, is equally dismissive of the outfit. Addressing a gathering at Puliyampillimugal at Ambalamedu, Mr. Sreenijin says that the outfit in Kizhakkambalam is making promises, but has not been able to fulfil them.

From the open vehicle he is standing in for the day’s campaign, Mr. Sreenijin promises residents in the area close to the BPCL refinery that a drinking water project will be launched and the problem of environmental pollution in the area will be addressed. Residents in the area are complaining about the absence of a green belt around the refinery.

He tells The Hindu that the presence of Twenty20 will be beneficial for him since UDF voters are likely to gravitate towards the outfit. It has no concrete standpoint on issues like communalism, he said.

Campaigning through Kunnathunad panchayat, Twenty20 candidate Sujit P. Surendran is greeted by supporters at different points when his vehicle halts. In raising the issue of providing basic facilities, Twenty20 is addressing a domain that other parties have failed to address, he said. Part of the campaign material is a booklet that lists the outfit’s contributions to Kizhakkambalam, including road work, construction of the God’s Villa housing colony and a supermarket that offers essentials at cheap prices.

When Renu Suresh, the NDA candidate, arrives after noon at a deserted Shappumpadi in Pazhanganad, she addresses a handful of party workers. “The benefits of Union government projects and welfare will be brought to the people of Kunnathunad,” she says into a microphone, before moving on to what she says is a larger event at Pookattupady.