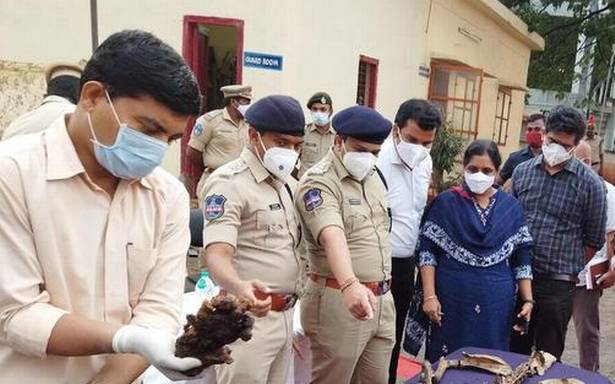 A tiger was killed by suspected members of an inter-state gang of poachers using an electric trap in the forest area of Mulugu district on September 21.

The incident came to light on Sunday after a joint team of police and the forest staff nabbed four alleged poachers during a vehicle checking drive and seized a nail of the killed tiger from a Chhattisgarh-bound car at a forest route near Kodishala in the tribal majority district on Sunday morning.

Giving the details of the seizure of tiger nail at a press conference in Mulugu on Sunday, Superintendent of Police Sangram Singh Patil along with Chief Conservator of Forests, Warangal Circle, Asha said that the accused killed the tiger using an electric trap at a strategic location in the forest on September 21.

They along with their accomplices removed the skin of the tiger and carried its skin and nails with them leaving other body parts at the site.

They were caught while heading to Chhattisgarh in a car to show the tiger’s nail to buyers and fix up a deal to sell the skin and other body parts.

The accused, identified as podu farmers, reportedly confessed to the police that they resorted to poaching to earn extra money to meet their expenses.

The joint squad of police and forest personnel seized tiger skin, skeletal remains, parts of leg, nails and snares used in poaching the tiger from the accused.

Mulugu ASP Potharaju Sai Chaitanya, DFO Shiv Ashish and others were present at the press conference.