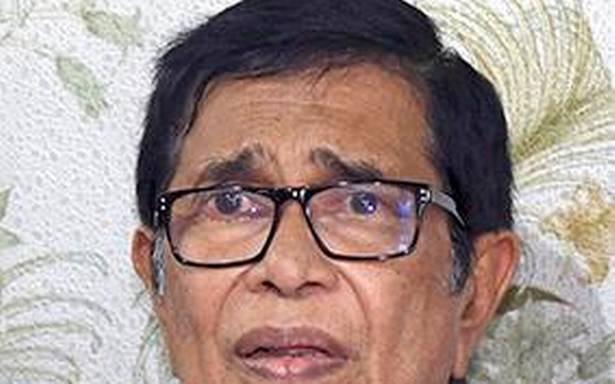 Congress leader had been a member of Parliament since 1980

The 80-year-old Congress leader was admitted to Yenepoya hospital in Mangaluru on July 19 following intracranial bleeding suffered after a fall in his house during a routine workout on July 18. He underwent operation for removal of a clot in the brain on July 27 and was undergoing regular dialysis.

A hospital spokesperson said Mr. Fernandes passed away at 2.15 p.m. He is survived by his wife, a son and a daughter.

Hailing from Udupi, Mr. Fernandes had been a member of Parliament since 1980. As a Union minister in the UPA government, Mr. Fernandes held the portfolios of Road Transport and Highways, Labour and Employment, Statistics and Programme Implementation and Overseas Affairs both as a Cabinet Minister and Minister of State.

He was among the close confidants of Indira Gandhi’s family, including former prime minister late Rajiv Gandhi, his wife Sonia Gandhi and son Rahul Gandhi. He served Rajiv Gandhi as his Parliamentary Secretary. He had held various positions in the All India Congress Committee (AICC), including general secretary, and had served as president of Karnataka Pradesh Congress Committee (KPCC). He was among the six trustees of National Herald.

He had his early education in Board High School in Udupi and had graduated from the Mahatma Gandhi Memorial College in Udupi. He entered politics through the Youth Congress and had been elected to the then Udupi civic body in 1972.

He entered the Lok Sabha from the then Udupi constituency in 1980, and was re-elected until he lost to I. M. Jayaram Shetty of BJP in 1998. Later, he got elected to the Rajya Sabha.

A practitioner of yoga, Mr. Fernandes had spoken in support of the Indian systems of medicine, including naturopathy, in Parliament.