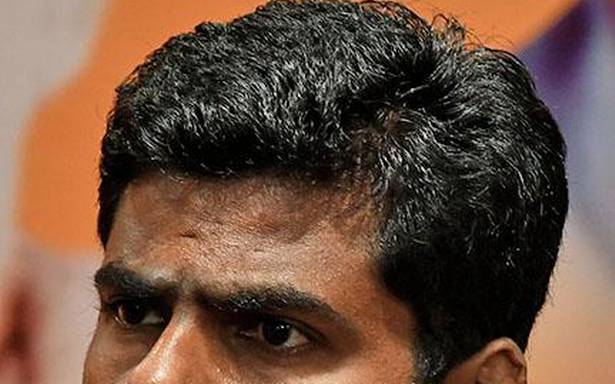 Neighbouring States paying them for almost 30 days a month: Annamalai

Former IPS officer K. Annamalai has filed a public interest litigation petition in the Madras High Court challenging a February 19, 2019, Government Order which restricts the number of call out duties that could be assigned to the Home Guards, those who voluntarily serve as an auxiliary force to the police, to just 10 days a month.

When the case was listed for admission before the first Division Bench of Chief Justice Sanjib Banerjee and Justice Senthilkumar Ramamoorthy on Tuesday, the judges ordered notice to the Home Secretary, the Director General of Police and others returnable by 10 weeks. The judges directed State Government Pleader V. Jayaprakash Narayanan to get instructions by June 15.

Mr. Annamalai said the Home Guards was a voluntary force raised in 1946 to assist the police in controlling civil disturbances and communal riots. Their role was to serve as an auxiliary force to the police in maintenance of internal security and help in any kind of emergency, such as an air-raid, fire, cyclone, earthquake and epidemic.

Home Guards were recruited from cross sections of society and utilised to carry out all functions performed regularly by police constables. They had been working as part and parcel of the Police Department and perform duties, such as driving, traffic control, night patrolling, VIP bandobust, election duty and serving of court summons, the petitioner added.

Pointing out that the Home Guards were originally paid a meagre amount of ₹150 a day in Tamil Nadu, he said the amount was increased to ₹560 a day by way of a G.O. issued on July 7, 2017. However, that G.O. decreased the number of call out duties for them from 16 to five days a month, thereby virtually nullifying the pay increase.

On February 19, 2019, another G.O. was issued, increasing the call out duties to 10 days a month. Nevertheless, stating that it would not be sufficient, the petitioner pointed out that the Home Guards in neighbouring States were paid for almost 30 days a month and some States even offered them a pay equal to the monthly pay of a Grade II police constable.