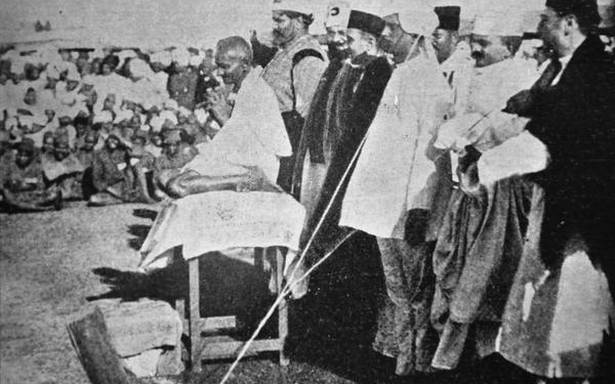 Thousands responded to the call to join the struggle, but only a few are remembered

Influenced by the freedom fighters led by Mahatma Gandhi, lakhs of people from even remote areas of the northern districts of Karnataka plunged into the freedom movement, with scores sacrificing their lives and many others spending years behind bars.

There are tales of heroic fights from commoners all across the region. The valiant fight of the Queen of Kittur (Belagavi district) Kittur Chennamma and her lieutenants Sangolli Rayanna, Amatur Balappa, and Gurusiddappa in the early 19th Century is known across the region.

Belagavi city hosted the 39th all-India session of the Congress party in 1924 — the only session chaired by Mahatma Gandhi. Over 20,000 delegates attended the session in Tilakwadi, for which the Royal Railways set up a temporary railway station.

Although Belagavi district’s history is dotted with several mutinies, barring a few leaders and places, the rest are unknown. “The bookBelagavi Zilleyalli Swatantra Sangrama by Annu Guruji, veteran freedom fighter, lists over 300 such villages and towns,” said Subhash Kulkarni, writer and former chairman of the district Khadi Gramodyoga Sangha.

The book has details of warriors such as ‘Karnataka Kesari’ Gangadhar Rao Deshpande of Hudali, Venka Reddy of Hooli, Srirang Kamat of Bailhongal, Vaman Rao of Bidri, Ba Ya Deshpande of Pachchapur, and Shivanagouda Patil and Baburao Thakur of Belagavi taluk. These are the leaders who carried a cash reward of ₹5,000 on their heads.

Inspired by Sabarmati Ashram, Gangadhar Rao Deshpande set up a Kumri Ashram in Hudali villag and Gandhiji stayed there and the nearby Khadi kendra for nearly two weeks. The Khandi centre is still functional.

The adjacent district of the then undivided Dharwad district too was visited by Mahatma Gandhi in 1920, and this further motivated people such as Sir Siddappa Kambali, Gudleppa Hallikeri, N.S. Hardikar, Mailara Mahadeva, Hosamani Siddappa, Andanappa Doddameti, Umabai Kundapur, and Krishnabai Panajikar. Gandhi’s visit resulted in massive support for the non-cooperation movement.

During a protest related to the Khilafat movement, three activists — Mallikasab bin Mardansab, Goususab bin Khadarsab, and Abdul Gaffar Chautai — lost their lives in firing by the British onJuly 1, 1921, near Jakani Bhavi in Dharwad.

Mailara Mahadevappa of Motebennur, considered to be the lone participant from Karnataka in Gandhi’s ‘Dandi March’, lost his life in police firing during a violent protest related to the Quit India Movement. The British fired when the protesters tried to lay siege to a revenue office at Hosaritti, and along with Mahadevappa, two others — Veerayya Hiremath and Tirukappa Madiwal —too laid down their lives. Narayan Mahadeva Doni, 16, lost his life during police firing during a protest as part of Quit India in Hubballi.

Gandhi’s influence motivated Sardar Veeranagouda Patil to set up a ‘Harijan Balikashrama’ in Hubballi, where he and his wife (despite facing social boycott) sheltered girls from downtrodden sections of society. Similarly, N.S. Hardikar went on to establish the Hindustani Seva Dal in Hubballi, which grew into an all-India organisation.

Echo of First War of Independence

Exactly 10 years after India’s First War of Independence in 1857, the anti-British sentiments echoed in Bhalki, and it was later termed the Bhalki Conspiracy. The associates of Nana Saheb Peshwa II and Tatya Tope, the notable leaders of the revolt, regrouped in Hyderabad and staged attacks against British camps in Secundrabad, Aurangabad, and other places in 1862. Rao Saheb, the nephew of Nana Saheb, who led the attacks, was caught and executed by the British. His associate Rama Rao challenged the British by hoisting Bhagwa Dhwaj at Ashti village near Bhalki in 1867.

The British began a manhunt and when Rama Rao, also known as Jung Bahadur, and his associates Balakrishna, Vitoba, and Bhima Rao were holding a meeting at Bhalki, the British arrested them. They were charged with hatching a plot against the British and the Nizam rule and awarded life imprisonment. Two others, Vishwanath and Jahangir Ali, were sentenced to 14 years in prison. The Bhalki Conspiracy is considered to be the last echo of India’s First War of Independence.