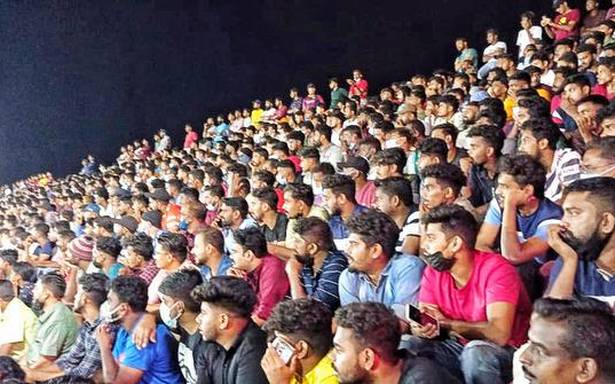 Sevens tournaments have kicked off after the pandemic-induced lull

A new season of football ecstasy and celebration has begun in Malabar even as fears of a fresh COVID-19 outbreak are gaining strength day by day.

The sevens football tournament season kicked off on Sunday night with the beginning of Khader-Ali Tournament at Perinthalmanna, one of the biggest events of the season.

Sevens football is a passion and an inseparable means of joy for the people of Malabar, especially Malappuram.

After having been deprived of a year’s complete spirit and joy by the pandemic, the football zest is back with a vengeance this time. The turnout at the opening match of the inaugural tournament held at Perinthalmanna stood testimony for the people’s passion.

“The turnout was exceptional. We had doubts about the people’s reception of the tournament this time, especially as there are no foreign players,” said Super Ashraf, State general secretary of the Sevens Football Association (SFA).

This year, the SFA proscribed the participation of foreign players in sevens football because of COVID-19 scare. Although it will be a big miss for the spectators, it will be a solace for the organisers.

“We used to have many foreign players, especially Nigerians. We decided against allowing foreign players this time because it will be a big risk. The formalities over their arrival and the risk involved in it will not be worth, especially during a small season ending by April,” said Mr. Ashraf.

The SFA has sanctioned 28 tournaments this year. In the coming days, floodlights will start beaming from the paddy-fields across Malabar, and hoorays of thousands can be heard from galleries made up of bamboo and areca-nut trees.

The size of the galleries will vary. At Perinthalmanna, the gallery has 9,000-spectator capacity.

“The presence of known players can add to the charm not only to the team, but to the tournaments also,” said Mr. Ashraf.

Each tournament with an average of 20 to 26 teams participating can take up to one month to finish. However, the expenses have greatly increased. A large tournament can cost nearly ₹1 lakh a day. But with aficionados turning out in good spirits and numbers, the organisers are not worried. Their only worry remains a sudden outbreak of COVID-19 and ensuing restrictions.