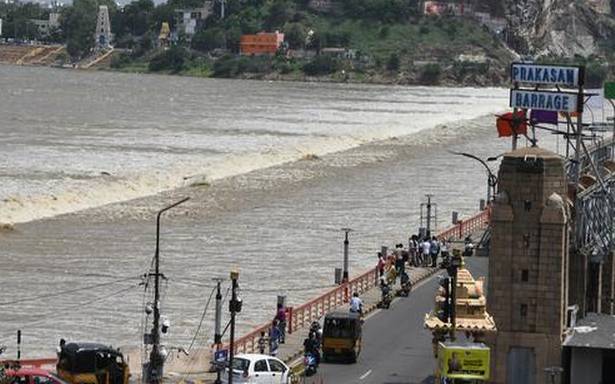 The floodwater discharge at Prakasam Barrage rose to 2.57 lakh cusecs as of 7 p.m. on Monday following a continuous rise in inflows from the Pulichintala project.

About 10,000 cusecs of water have been released into the irrigation canals while 2.47 lakh cusecs of floodwater was being discharged into the sea. As of 10 a.m., the inflow and outflow of flood at the Prakasam Barrage was at around 83,000 cusecs.

As many as 40 crest gates of the Barrage were raised up to five feet and 30 gates were raised up to six feet to let out the excess floodwater downstream. It was the highest flood level recorded at Prakasam Barrage this season and the flood level is likely to cross the first flood warning level of 3.96 lakh cusecs by Monday night.

The district administration made arrangements to stop the entry of water into residential colonies in the Krishnalanka and Ramalingeswara Nagar areas in the city and several other mandals alongside the river course.

A 24 member team of the National Disaster Response Force has been deputed in the city to help the public and authorities in the event of inundation. Andhra Pradesh State Disaster Response Force Commissioner K. Kanna Babu alerted the officials of Krishna and Guntur districts regarding the heavy inflows to Pulichintala and Prakasam Barrage.

He said the floods will likely recede by Tuesday evening and asked the public to stay safe and follow the instructions of the local authorities.