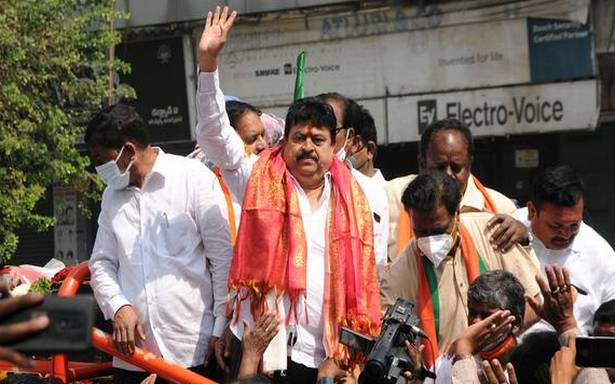 Present MLC and BJP candidate, TRS candidate prominent among those who filed their papers

Monday, the penultimate day to file nominations for the Mahabubnagar-Rangareddy-Hyderabad Graduates’ Constituency elections for the Legislative Council, saw hectic activity at the GHMC headquarters.

While the total sets of nominations filed have been 90 till date, 47 of them were filed on Monday alone by 26 candidates. Prominent candidates to file the papers on Monday were Surabhi Vani Devi from the Telangana Rashtra Samithi (TRS), N. Ramchander Rao from the Bharatiya Janata Party (BJP) and G.Chinna Reddy from the Congress.

Speaking with media, Ms.Vani Devi expressed happiness over being chosen by the TRS, and said she will work for development.

BJP candidate N. Ramchander Rao arrived in a procession, as part of a rally taken out from the party’s city office in Barkatpura. At GHMC, however, he was accompanied by Member of Parliament Dharmapuri Aravind and senior leader Perala Shekhar Rao among others.

Speaking on the occasion, Mr. Aravind asserted that Mr. Ramchander Rao is set to win with huge margin, as he had the record of raising various public issues during his stint as MLC. Mr. Ramchander Rao said he spoke in the Legislative Council on a wide range of issues, including unemployment and drinking water. He reminded that he made several suggestions to control flooding of the city three years ago.

Earlier, addressing a gathering at the party office, Union Minister of State for Home G. Kishan Reddy said the incumbent MLC had a “stellar reputation” as a lawyer and as a member of Bar Council and Press Council. “He has highlighted many issues of public concern in the last five years. We have defeated a employees union leader in 2015 when TRS popularity was its peak so we should strive for more support this time especially when various sections like employees, students, farmers and others are upset with this government,” he pointed out.

Member of Parliament and Telangana Pradesh Congress Committee working president A. Revanth Reddy who accompanied Mr.Chinna Reddy criticised Chief Minister K. Chandrashekhar Rao, saying he was fielding Ms. Vani Devi from a seat where TRS is set to lose. Instead, she should have been give an MLC seat under Governor’s quota, or an MP seat which is set to fall vacant in six months, if Mr. Chandrashekhar Rao really wished to prove his respect for the late Prime Minister, he said, urging Ms.Vani Devi to revoke her nomination.

Tuesday is the deadline for filing nominations.

Among others, magician Samala Venu also filed his nomination papers. He came in a rally with his supporters from A.V.College and submitted his papers.