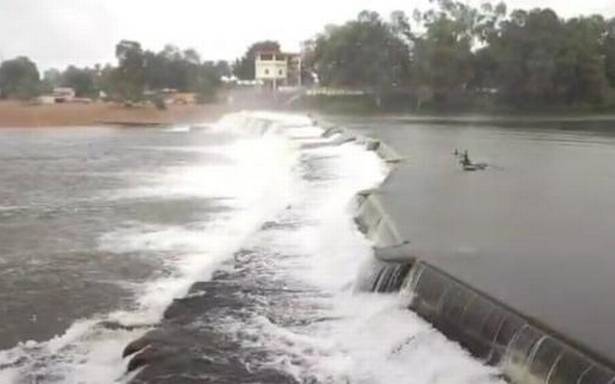 Over 5,000 cusecs being discharged from Bhavanisagar dam

A flood alert was sounded to people living on the banks of River Bhavani here on Tuesday following the discharge of over 5,000 cusecs of surplus water from Bhavanisagar dam into the river.

There was a sharp increase in inflow at Kodiveri anicut too.

Due to rain in its catchment areas, water level at the dam touched 102 feet against the maximum reservoir level of 105 feet on August 30.

As per the flood regulation norms, the quantum of water that could be stored in the dam from August to October is 102 feet and hence the entire inflow is being discharged.

Officials of the Public Works Department said that on Monday, surplus water of 1,500 cusecs was discharged into the river.

However, due to rain in the catchment areas, the inflow increased to over 5,800 cusecs on Tuesday morning. The discharge was stepped up to 5,114 cusecs, resulting in flooding at the anicut, they added.

Revenue officials issued a warning to the people living at low-lying areas to move to safe locations as the discharge continues to be over 5,000 cusecs. Also, ban on bathing at the anicut continues while officials are monitor the flow of water.