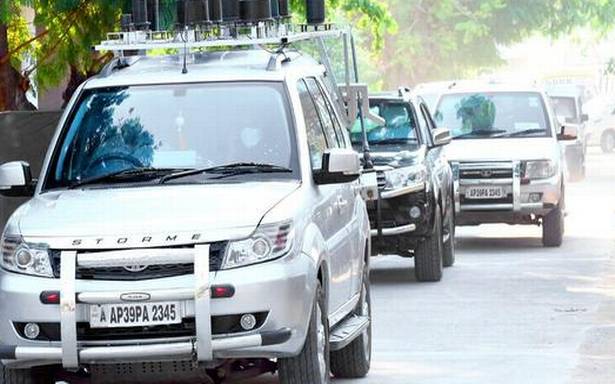 CM to arrive today in Tirupati to felicitate 1971 war veterans

Patriotic fervour gripped the temple city coinciding with the arrival of ‘Swarnim Vijay Mashal’, the flame of glory, on Wednesday.

The flame, lit by the Prime Minister Narendra Modi to mark the golden jubilee of the 1971 Indo-Pakistan war, is on a year-long tour across the nation, reaching the war veterans. The southern leg of its tour began with Tirupati.

Brigadier J.J.S. Bhinder, Commandant of AOC Centre, received the victory flame at Sri Venkateswara University with full military honours, while senior military personnel and civil service dignitaries placed wreath in honour of the gallant warriors who had sacrificed their lives. The flame was carried by noted sportsperson during what is known as its ‘Last Mile Run’, even as balloons representing the three colours on the national flag were released into the air and an audio-visual narration of the 1971 war was presented.

Chief Minister Y.S. Jagan Mohan Reddy will arrive here on Thursday to participate in the felicitation of a war veteran Major General C. Venugopal (95) at the latter’s Chenna Reddy colony residence in Alipiri. MCT Commissioner P.S. Gireesha told the media that the war veteran would be felicitated along with the family members of two others viz., Sanyasi Naidu of Visakhapatnam and K.J. Christopher of Kakinada. The victory event will be celebrated in the form of a State-level meet at the Police Parade Grounds, where entry is open for all, said Mr. Gireesha, along with Brigadier Jaideep Yadav, Colonels Rahul Sharin, Ganga Satish, Lietenant Colonels Sumit Chabra and P.K. Singh.

On its part, the police department led by Superintendent of Police (Tirupati Urban) C. Venkata Appala Naidu ensured security arrangements, in view of the VIP visit. A convoy rehearsal was taken out from the Renigunta airport to Chenna Reddy Colony and further to the parade grounds.