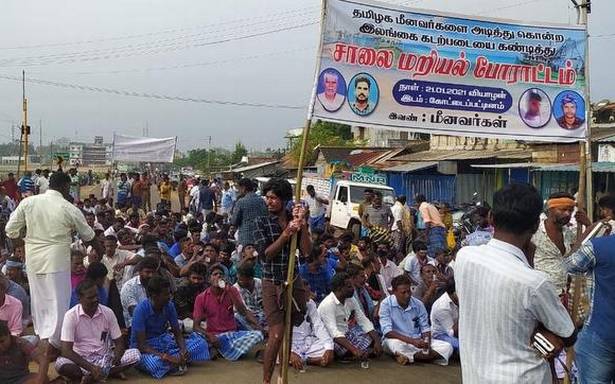 The fishermen have demanded compensation for the deaths; for the bodies to be handed over to the Indian authorities immediately, and for the autopsies to be conducted in India

Over 200 fishermen resorted to a road roko at coastal Kottaipattinam in Pudukottai district on Thursday, in the wake of the recovery of the bodies of fishermen in Sri Lanka, suspected to be of those reported missing from Tamil Nadu.

The fishermen, who held the Sri Lankan Navy responsible for the deaths, squatted on the East Coast Road, led by the Kottaipattinam mechanised boat fishermen president, Chinna Adaikalam, for over one-and-half hours.

Alleging that the Sri Lankan Navy had beaten to death the missing fishermen, the fishermen demanded that the bodies be immediately handed over to the Indian government authorities. They also wanted the autopsies to be conducted in India and demanded government jobs for a family member of the dead fishermen.

Four fishermen A. Mesiya (30), V. Nagaraj (52) N. Samson Darwin (28) and S. Senthil Kumar (32) all hailing from Ramanathapuram district — had set sail on board a mechanised boat from Kottaipattinam jetty on January 18 along with over 200 mechanised trawlers. The four had been staying at Kottaipattinam and were engaged in fishing activities for nearly 10 years, said official sources. The fishermen who were supposed to return to the shore on January 19, were reported missing.

The Sri Lankan Navy had earlier said that one mechanised boat with four fishermen on board “sank” as the Sri Lankan patrol units tried apprehending it along with some 50 fishing trawlers found “poaching” on the island nation’s territorial waters. The boat sank after it resisted arrest, reports quoting Sri Lankan officials said. The bodies of two fishermen suspected to be those missing, were recovered on Wednesday.

Aranthangi Sub Collector Anand Mohan held talks with the protesters and persuaded them to withdraw the stir. Revenue officials told The Hindu that they were yet to get official confirmation as of now regarding the deaths of the four fishermen adding that they were trying to get details and had sent reports to the State government about the situation and the demands of the fishermen. A strong posse of police has been deployed at Kottaipattinam as a precautionary measure.

“We have sought adequate compensation for the families of the fishermen whose bodies have been recovered and have asked for the bodied to be handed over to the Indian authorities immediately. We have also demanded that post-mortems be done in India,” said Chinna Adaikalam, the president of the Kottaipattinam Mechanised Boats Association. “The Revenue officials have told us that they would get back to us in 24 hours,” he said adding that the fishermen would chalk out their next course of action based on the official response.