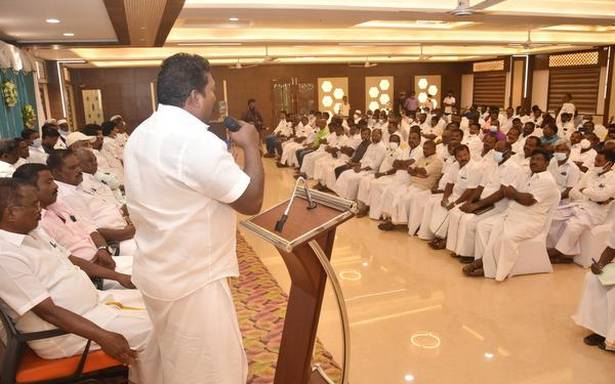 ‘Centre, State must roll back diesel price before Nov. 10’

Setting a deadline of November 10 to the Central and State governments for roll back of diesel prices, the Tamizhaga Anaithu Meenavar Kootamaippu (Tamil Nadu Fishermen Federation) on Monday announced its plan to launch an indefinite strike from November 11 and stage a massive demonstration in Chennai on November 15.

Tabling a five-point charter of demands at a meeting held here, in which office-bearers of about 15 associations from Nagapattinam, Karaikal, Thoothukudi, Kanniyakumari and other coastal districts of the State participated, the members of the federation resolved to go on an indefinite strike.

Speaking to reporters, fishermen leader Sesu Raja said the diesel prices had touched a new high and fishermen found it difficult to make both ends meet. With poor catch on the one side and a bundle of issues on the other, most of the fishermen experienced mounting debts.

The subsidy component for diesel too from the governments had not been credited properly, he alleged.

Besides diesel price, the fishermen also faced threats from the Sri Lankan Navy while fishing in the Palk Bay area. By allowing the fishermen to catch their produce in the traditional Katchatheevu, the issue might be resolved.

The Centre should hold talks with its counterpart in the island nation at the earliest and ensure peace prevailed in the fishermen community. Also, the Sri Lankan Navy should not harass the fishermen under the pretext of violation of territorial waters. These and other resolutions were passed at the meeting, which also condemned the Sri Lankan Navy for the death of a fisherman, Rajkiran, 30, from Pudukottai district last week.

Another fishermen leader N.J. Bose said there were 6,500 mechanised boats in Tamil Nadu and Puducherry and about 50,000 country boats.

“We will keep off the sea from November 11 indefinitely, unless and until the issue was resolved permanently,” he said and appealed to Chief Minister M.K. Stalin to immediately intervene in the issue.