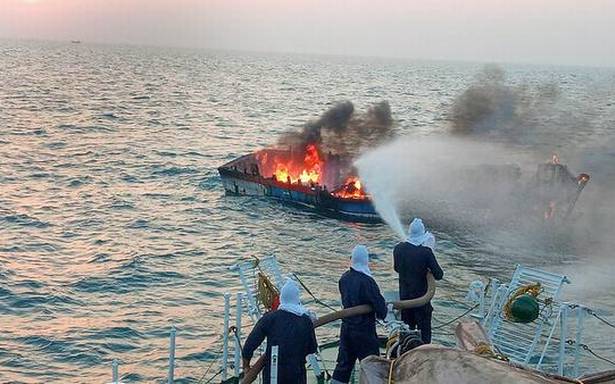 Six other crew of vessel from Okha reportedly abducted.

A fisherman from Maharashtra was killed in firing by Pakistan Maritime Security Agency (PMSA) on an Indian fishing boat off Gujarat. Six other fishers on boat have reportedly been abducted .

The boat which came under fire was from Okha in Gujarat.

“A boat sailing from Gujarat State in India illegally transgressed into Pakistan’s territorial waters. Subsequently Pakistan Maritime Security Agency’s ships attempted to interdict the intruding boat, which even after repeated warnings did not respond or change course,” the PMSA said.

Gujarat Police have confirmed the incident. “A fisherman from Thane in Maharashtra, who was on a fishing boat Jalpari was killed after the PMSA personnel opened fire on him and other crew members on Saturday evening,” Devbhumi Dwarka Superintendent of Police Sunil Joshi told media persons.

The body of the deceased fisherman, Sridhar Ramesh Chamre, 32, was brought to Okha port on November 7, and an FIR has been registered by the Porbandar Navi Bandar police, which has jurisdiction across Gujarat over any incident that occurs beyond 12 nautical miles in the Arabian Sea.

Chamre and six other crew — five from Gujarat and one from Maharashtra — set off from Okha on October 25.

The Gujarat coast has seen several incidents of fishermen caught by the PMSA for transgressing the International Maritime Boundary Line (IMBL). There are more than 350 fishermen from Gujarat currently in Pakistani jails after having been intercepted by the agency along the IMBL.

In April 2020, Pakistani Marines opened firing on two boats near the IMBL in the Arabian Sea off Gujarat in which one person was hurt.

In 2019 the PMSA had sunk an Indian boat with seven fishers onboard. Six of them were rescued but one person was reported missing. In 2015, an Indian fisherman was killed in firing by the PMSA near the IMBL.

Reacting to the incident, sources in the Ministry of External affairs said: “We have taken serious note of this incident. We are going to take up this issue diplomatically with the Pakistan side. The matter is under investigation and further details will be shared in due course.”