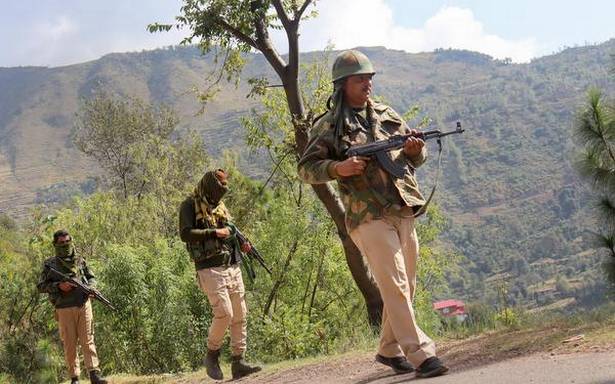 ‘No clarity on number of terrorists, say Defence source on 15th day of search

A day before five Army soldiers were killed by unidentified terrorists in Poonch on October 11, security agencies had intercepted a phone chatter confirming their presence in the area.

The Poonch encounter that has continued for 15 days, is one of the longest such operation in the dense forests south of the Pir Panjal range, in more than a decade. The terrorists have so far killed nine Army soldiers and injured three others, including two Jammu and Kashmir policemen in three separate encounters in the Poonch-Mendhar-Rajouri region since October 11.

Detailing the sequence of events, a senior government official told The Hindu at least two gun toting men had walked into a labourer camp on October 10 and asked one of the workers for his phone. The labourer, whose phone was taken away, had then walked to the nearest Army post and alerted the officials. It was after this that the phone was placed under surveillance following which the entire area along the Line of Control (LoC) in Poonch-Rajouri with Pakistan was put on a high alert.

“A small group is believed to be behind the attack though there is no clarity on the number of terrorists,” a Defence official said. A search is on in the jungle, the official stated.

Five soldiers — Vaisakh H., Jaswinder Singh, Mandeep Singh, Gajjan Singh and Saraj Singh who were among the first to be killed on October 11 — were part of a cordon and search team. The cordon had been placed near Surankote, at least 10 kilometres from the LoC after the phone chatter was intercepted.

On October 15, the Army said that in a counter terrorist operation in progress in the area of Nar Khas forest in Mendhar, “there was heavy exchange of fire”, and in the ensuing gun fight Rifleman Vikram Singh Negi and Rifleman Yogambar Singh were critically injured and later succumbed to their injuries.

On October 16, Army said in a statement that Subedar Ajay Singh and Naik Harendra Singh were also killed in action during search operations in Nar Khas forest in Mendhar. Communication with the two was disrupted and their bodies were recovered on October 16.

On Sunday, Zia Mustafa, a Lashkar-e-Taiba (LeT) convict who has been in jail for the past 14 years was killed when a joint search party of the police and Army took him to the Bhatta Durian forest in Poonch’s Mendhar area to trace the terrorist’s hideout. The joint search party came under heavy fire from the hiding terrorists and three security personnel were also injured in the encounter.

Police claimed they had taken Mustafa, who had been lodged in Kot Balwal Jail in Jammu on remand, as he had also infiltrated from the same route more than a decade ago.

The terrain in Poonch is tough and historically encounters have been long and its easy for terrorists to flee, one officer familiar with the area said.

“They are believed to be a foreign terrorists who have been in and around Srinagar for few months,” another official said.

The Hindu reported on October 18 that a new terror group called PAFF (People’s Anti Fascists Front), a front of LeT, had claimed responsibility for the ongoing attack. The group released an eight-minute video about the ongoing encounter and claimed that the two unidentified terrorists had watched over an Army patrol party for around 10 hours before ambushing their tent around dawn the next day (October 11). The narrator in the video, who is identified as the leader of the strike team, says that they crossed “Chamrer Gali” around 4.30 p.m. on October 10. An Army source had dismissed the video as an “immature attempt at propaganda.”