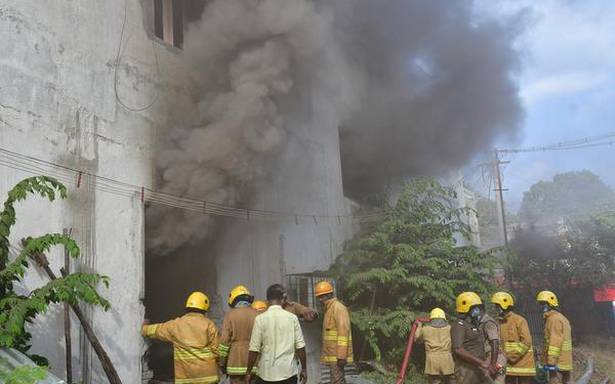 Fire broke out in a nationalised bank in the city and destroyed a few lakh-worth computers and documents on Wednesday afternoon.

The fire reportedly broke out in the inverter fitted at the Central Bank of India’s Sripuram Branch on Wednesday afternoon and the bank employees alerted the Fire and Rescue Services. Since thermocol had been used for making the false ceiling of the branch, the fire spread rapidly.

Fire tenders from Palayamkottai and Pettai rushed to the spot to douse the flames. After breaking the window on the rear side of the bank with the help of an earthmover, the fire and rescue services personnel entered the building to extinguish fire that destroyed good number of computers and documents.

However, the employees were tight lipped about the possible damage that could have been caused by the fire to the cash kept in the bank.