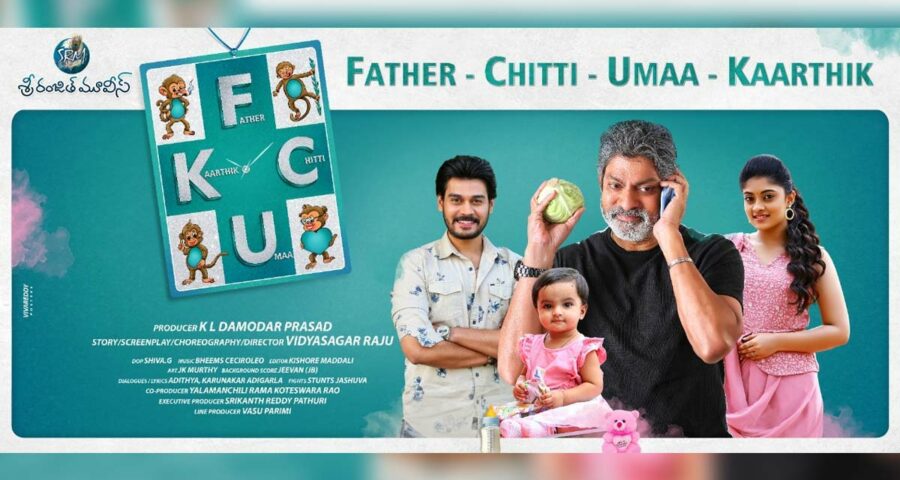 Story: Karthik(Ram Karthik)  is the son of Phani Bhupal (Jagapathi Babu)  who sells condoms and he is a playboy. Though his son Karthik is just a contrast of his dad’ character.  Karthik falls in love with Uma(Abhirami)  who is already engaged but he tries to woo her.  One day Phani Bhupal meets with an accident and he is found with a small girl Chitti .  Who is Chitti? And how does her presence affect the lives of  Bhupal, Karthik, and Uma?  To get this answer one should watch the movie on the silver screen.

Performance:  The performance and body language of  Jagapathi Babu is one of the major assets of FCUK. He elevates  the role of playboy in a superb way.  He has suited perfectly in this role. His salt and pepper look attracted the audience. Ammu Abhirami who makes her debut in Tollywood with this film, delivers a decent performance.  Master Bharath and Ram Prasad excelled in the role but they do not provide much comic relief. Rest of the cast of FCUK performed accordingly.

Technical:  Cinematography by G Shiva is fantastic and the movie has some fantastic visuals. The production values are ok. The songs and BGM are good. Few scenes look silly. Dialogues are meaningful and it adds impact to the scenes. The story of FCUK is interesting but there is no excitement in the flow of the scenes. Editing is not up to the mark. There is need of serious editing in FCUK as many dragged scenes that can be easily trimmed.