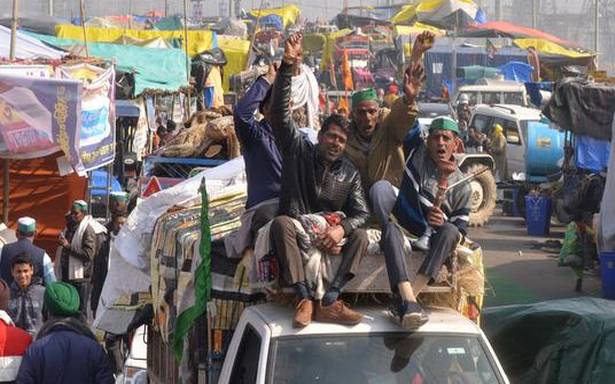 Farmers groups have rejected the Supreme Court’s suggestion to appoint a committee to resolve the ongoing crisis over three farm reform laws. They say the Centre’s attitude in court on Monday makes it clear that the government will not agree to discuss farmers’ demand for repeal of the three laws in such a committee.

“While all organisations welcome the suggestions of the Hon’ble Supreme Court to stay the implementation of the farm laws, they are collectively and individually not willing to participate in any proceedings before a committee that may be appointed by the Hon’ble Supreme Court,” said the Samyukt Kisan Morcha (SKM), in a statement issued late on Monday night.

The statement added that the decision comes on “Looking to the attitude and approach of the Government which made it clear before the court today repeatedly that they will not agree to the discussion for repeal before the committee."

Lawyers representing the farmers at the court hearing had said they would consult with the farmers’ groups regarding the court’s suggestion of a committee. Discussions with the lawyers were held at the Singhu border, led by union leaders Balbir Singh Rajewal, Darshan Pal, Prem Singh Bhangu, Rajinder Singh Deep Singh Wala and Jagmohan Singh. After discussion on the pros and cons of the committee, the farmers rejected the suggestion.

The statement expressed “respect” and “gratitude” for the Court’s “understanding of the problem and comforting words” during the hearing, but regretted that the unions were unable to accede to its suggestions, as millions of farmers across the country were demanding full repeal of the laws.

They expressed disappointment that the Court would pronounce the order on Tuesday without further consultations.

“The Hon’ble Supreme Court was requested by our lawyers as also by other lawyers including Sh Harish Salve to fix the hearing again tomorrow to enable them to consult the organisations and seek their consent to the suggestion of the Hon’ble court,” said the statement. “We have been told that no such hearing has been fixed for tomorrow as per the cause list already published for tomorrow till 9 p.m. and that only the matters are listed for pronouncements for order by the Hon’ble Court. These events have deeply disappointed us, our lawyers and also farmers at large.”

Earlier, BKU (Ekta-Ugrahan), one of the largest farmer groups in Punjab made it clear that the agitating farmers want the farm laws to be withdrawn. “Let’s wait for Supreme Court’s order but we are here to get the farm laws repealed,” said Jhanda Singh, Punjab State vice-president of BKU(U).

“These laws are a clear encroachment on State functions. Agriculture is a State subject but yet the Centre got the laws passed through the via media of trading, which falls in the concurrent list. These legislations are clearly violating the federal principle. Supreme Court should ask the government to repeal the laws,” he said.

“The Supreme Court’s initial comments on government inaction and [upholding] the right of the farmers to protest is welcome,” said All India Kisan Sabha general secretary Hannan Mollah. With regard to the court’s suggestion that it may impose a stay on the implementation of the reform laws, he noted that a stay was not the same as repeal.

Another farmer leader, who did not want to speak on the record before the final order, said unions expected a “honey trap” to lure them into binding mediation in the form of a court-appointed committee, followed by vacation of the protestors.

“Not a single petitioner has officially demanded mediation, although the Centre has been pushing farmers to discuss the issue in a committee,” said the leader. “This just goes to confirm that the government gets the court to do what it cannot,” he said.

The unions also dismissed any suggestion that their Republic Day plans had been put on hold. In court, senior advocate Dushyant Dave had refuted the Centre’s claim that farmers were going to bring 2,000 tractors to join the Republic Day parade.

“We have no intention of disrupting the parade on Rajpath or disrupting the celebrations in any way. We only said that we would hold our own parallel tractor parade in Delhi,” said a union leader.

United World’s soccer team begins training
We and our partners use cookies on this site to improve our service, perform analytics, personalize advertising, measure advertising performance, and remember website preferences.Ok