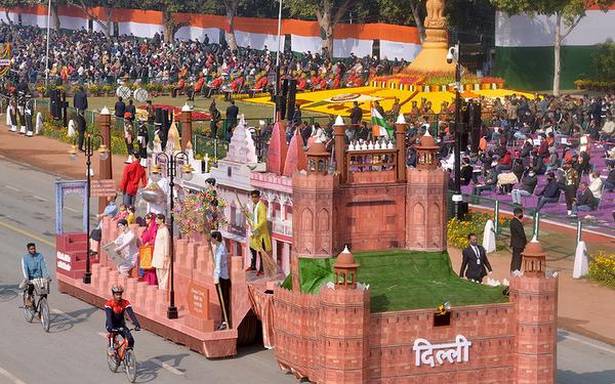 Ram, Shiva, Ayyappa, Allah and Guru Tegh Bahadur — all of them were mentioned at some point of the day during the Republic Day parade at Rajpath on Tuesday.

Before the parade began at 9.30 a.m., an anchor while briefing about different achievements of the country, said: “The construction of Ram temple at Ayodhya commenced with Bhoomi Puja and laying of foundation stone by Prime Minister Narendra Modi.”

“The epitome of Ayodhya’s cultural identity associated with mass sentiments and devotion, has been shown. The model of the temple in itself generates the feeling of devotion and reverence,” a booklet by the Ministry of Defence on the parade read.

Delhi’s tableau, which is also a representation of communal harmony, opened with a song that started with “Allah Hu Akbar Allah”.

The tableau of Punjab showcased the glory of the ninth Sikh Guru, Guru Tegh Bahadur, while that of Uttarakhand showed a temple of Shiva. “The tableau also shows Nandi — the vehicle of Lord Shiva, travellers in Kedarnath Dham and devotees. The rear portion of the tableau shows temple of Lord Kedar, which is one of the twelve Jyotirlingas. Divya Shila, shown just behind the temple is the divine rock that stood in the way of the floods and saved the Kedarnath shrine in disaster of 2013,” the booklet about tableau of Uttarakhand read. When the Brahmos Weapon System was shown during the parade, the anchor mentioned that the war cry of the unit is “Swamy Saranam Ayyappa”.

Most of the people The Hindu spoke to was thrilled to watch a ‘vertical charlie’ by a single Rafale aircraft and many liked the tableau by Uttar Pradesh, which had a miniature Ram temple.

A 27-year-old Yoga teacher, Naveen Chechi, and his two friends had come from Haryana’s Palwal to watch the parade.

“We came by car. But we were stopped at 8 a.m. near Lodhi Garden area and we had to almost run for an hour to reach here. Rafale was brilliant. I am very happy to see it. It shows that Pakistan and China is not a competition for us. I a Modi admirer,” he said.

An UPSC aspirant from Kerala, Gokul Das (25), said: “When the Ram temple tableau came, many people sitting next us to were thrilled and shouting Jai Shri Ram. I liked the Rafale.”

Outside the parade area

The thrill of watching the Rafale was there even outside the parade area. About 100 metres away from the parade route, a chaat seller, Ravi Yadav, said: “I couldn’t leave all my stuff so I missed seeing the Rafale. But, I have seen it on my friend’s phone. I really liked it.”

The area also had “COVID-19 booths”. “At the gate, we were checking temperatures of people using thermal guns . We also had emergency medicine and doctors here,” said Ashish Kumar, 25, a nursing officer.

“If anyone had a temperature of more than 100, then the person was not allowed inside,” he added.