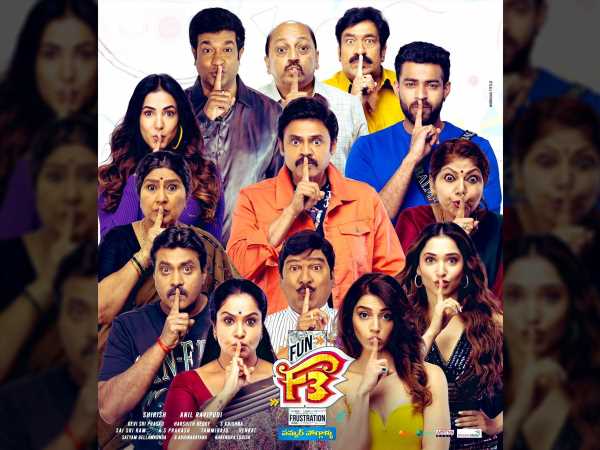 Story: (Venkatesh) and Varun Yadav (Varun Tej) are always after money.  They only want to make big money. One day they come to know that a rich businessman (Murali Sharma) in Vijayanagaram  who is looking for his lost son. So both Venky and Varun decide to go in as the lost son for inheriting the property.  What happens next? Will they become successful in this?  To get these answers, one should watch the movie F3 on the silver screen.

Performance: Venkatesh Daggubati entertains us with his perfect comedy timing. His body language and funny expressions are hilarious. His night blindness track is interesting. Varun Tej is good  and he has also shown good timing in comedy.  Varun as the stammering youngster creates superb chemistry with Venkatesh Daggubati.  Tamannaah Bhatia is good and looks very sensuous in the song. Her dubbing is also good. Mehreen  Pirzada looks cute on screen and does her best. Sonal Chauhan gets a good role after a long time and she sizzles.   The talented actor Murali Sharma is adequate as the industrialist. Sunil gets a meatier role and he also evokes laughs. Ali is fine. Rest of the cast including  Annapurna, Pragathi, and others perform well.

Technical: There is not much to the story of the film F3 . It’s Anil Ravipudi’s comedy sense that works big time. Anil Ravipudi did not concentrate on the story or logic, he only focused on fun and he succeeded in it. There is a comic flaw for almost all the characters in the film. Entire first half  of F3 is hilarious with comedy. Anil Ravipudi has a rare talent to write entertaining characterizations and get the comedy right.  The music by Devi Sri Prasad is decent. Cinematography by Sai Sri Ram is good. Dialogues are hilarious. Editing by Tammiraju is fine. Art direction is nice. Production values are decent.

Analysis:  On a whole, F3 is worth a watch for it’s comedy quotient!