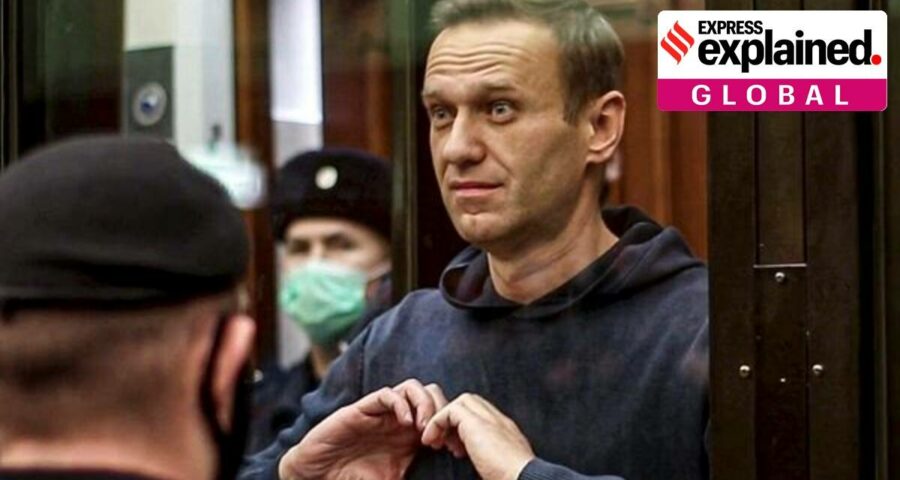 Alexei Navalny, a lawyer-turned-activist, came to prominence in 2008 after he started exposing corruption in Russian politics through a blog. In 2018, he was barred from standing against Putin in the presidential elections. Russian opposition leader and political prisoner Alexei Navalny who has been under arrest since February 2021 was awarded the European Parliament’s top Sakharov Prize for Freedom of Thought this week.

Who is Alexei Navalny?

Navalny is considered as one of the most fierce critics of Russian president Vladimir Putin and has been arrested several times for his involvement in organising anti-government demonstrations. He has been in jail since February this year after a court in Moscow sentenced him to a 2.5 year prison sentence for violating the terms of a 2014 sentence for fraud that was suspended.

In 2020, Navalny survived poisoning by a nerve agent, which he maintains was carried out by Russian authorities, an allegation that they continue to deny. Navalny founded the Anti-Corruption Foundation (FBK) in 2011, an NGO that claims to be the only non-profit in Russia that investigates, suppresses and discloses corruption offenses in the highest authorities. FBK has more than 6 million subscribers on YouTube.

In one of the videos posted by the FBK YouTube channel there is a reference made to “Putin’s crooks”. “We continue to fight for the Beautiful Russia of the Future,” the FBK website says.

The FBK released two documentaries that showed investigations into alleged corruption undertaken by some high-ranking Russian officials. One of them is the 2017 documentary called “He is Not Dimon to You” and the other is “Putin’s Palace”. Released in 2021, this documentary alleges that Putin has built a “palace” for himself that overlooks the Black Sea.

Russian authorities detained Navalny at a Moscow airport earlier this year in January after he returned from Germany for the first time since his poisoning in August 2020. Following this, the US and European countries demanded that Navalny be released from detention.

On August 20 last year, Navalny fell ill on a flight back to Moscow from Siberia. After the plane made an emergency landing, he was first taken to a hospital in the city of Omsk, from where he was later transferred to Berlin’s Charite Hospital while still in a coma.

Tests performed at the German hospital showed the presence of the Soviet-era military grade nerve agent called Novichok. This nerve agent was previously used to kill Russian spy Sergei Skripal and his daughter in Salisbury in the UK in 2018. Skripals’ poisonings are also the subject of the BBC One drama titled, “The Salisbury Poisonings”.

Navalny has maintained that the poisoning was carried out by the Russian authorities, who have denied any involvement in the attack.

Navalny, a lawyer-turned-activist, came to prominence in 2008 after he started exposing corruption in Russian politics through a blog. In 2018, he was barred from standing against Putin in the presidential elections.

He has also been arrested on multiple occasions and since he started political campaigning, Navalny has spearheaded many anti-corruption rallies in Russia and is considered to be the face of the opposition in Russia, a country that has long been known to eliminate dissidents and spies by poisoning them.

What is the Sakharov Prize and why has Navalny received it?

The Sakharov prize is the European Union’s highest recognition of human rights work. The first Sakharov prize was awarded to South African anti-apartheid revolutionary Nelson Mandela and Soviet dissident writer Anatoli Marchenko in 1988. Mandela spent 27 years in prison and Marchenko spent 20 years in prison, until his death at the age of 48 years.

The prize is typically awarded to dissidents, political writers, journalists, lawyers, writers, minority leaders, anti-terrorist groups and “long-serving prisoners of conscience” among others. Some other awardees of the recent few years include Iranian filmmaker Jafar Panahi who was awarded the prize in 2012 for exposing “injustice and repression.” Other awardees include Malala Yousafzai (2013), the democratic opposition of Venezuela (2017) and economics professor and advocate for China’s Uyghur Muslims Ilham Tohti (2019).

The prize is awarded by the European Parliament along with an endowment of 50,000 euros that is given at the end of each year. The candidates are first nominated by the parliament’s political groups after which members of the full committees vote on a shortlist of three candidates. Finally, the Conference of Presidents chooses the winning candidate. This time, along with Navalny the other two finalists included a group of Afghan women fighting for equality and human rights in their country and former interim president of Bolivia Jeanine Áñez.