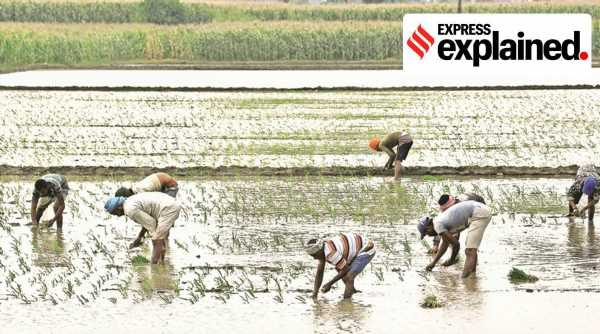 Farmers in both states have announced an agitation; in Haryana they said that they would gherao the homes of BJP leaders and take paddy-laden tractor trolleys there. The Centre has postponed paddy procurement from October 1 to October 11 in Punjab and Haryana, on the ground that heavy rainfall in these two states has delayed maturity of paddy and left the moisture content in fresh arrivals beyond the permissible limit. Farmers in both states have announced an agitation; in Haryana they said that they would gherao the homes of BJP leaders and take paddy-laden tractor trolleys there.

How much paddy have the two states grown?

At what time should the crop ideally mature?

Today, farmers opt for any of several short-duration varieties that offer high yield. Farmers mainly in Punjab prefer varieties that mature in 93 to 110 days — excluding a nursery period of 25-20 days when seeds are grown into young plants and then transplanted to the fields from the date fixed (June 10 and June 15). The shorter varieties will have started maturing by the end of September.

According to Punjab Agriculture University (PAU), Ludhiana, over 70% of the paddy area in Punjab is under short-duration varieties now, with very little area under traditional varieties such as PUSA-44 that mature in 160 days.

Also, a combined around 6 lakh hectares in the two states is under direct seeding of rice (DSR). Although the formal date of DSR sowing was June 1, farmers sowed after May 20 itself, because DSR does not require a puddling process as well as stagnant water in the field at least for three weeks after sowing.

Why are farmers upset with the government move?

If farmers delay harvesting of already ripened crop by 11 days, the grain will fall from the panicle and the yield will go down. And if they sell it to private players, they will not be paid at the MSP of Rs 1,960 per quintal. Not many farmers have the capacity to store all their rice after harvesting it on time.

“By delaying procurement, the government wants farmers to sell already ripened crop to private players first, and only then will it enter the market,” said Jagmohan Singh, general secretary, Bharti Kisan union (BKU), Dakaunda. He noted that paddy procurement had never been delayed in the past, even after heavy rains in the entire first week of October in 2019.

Farmer Kirandeep Singh from Attari village in Amritsar said, “All my paddy on 16 acres is ready to harvest and I was waiting for October 1 to come. Now I am confused, because delayed harvesting would cause a loss of yield, and a private player offered me just Rs 1,500-1,600 per quintal, a loss of Rs 460-360 per quintal compared to MSP.”

Jagdeep Singh of Sangrur district said potato and green pea sowing, too, will be delayed as these are sown in the first week of October after paddy harvesting.

When all short- and long-duration varieties, which too will mature by October 15, reach the mandis on October 11, there would be a glut and hardly any place to keep the crop. Even when procurement follows the normal schedule, there are days when the mandis witness a glut.

What could be the post-harvesting complications?

Delayed procurement raises concerns about increased stubble burning this year. This is because farmers, who get only 20 to 25 days between paddy harvesting and wheat sowing to manage the paddy stubble during normal procurement time, will get only 9-15 days this.

To manage the stubble from over 3 million hectares in this time is just impossible, many of them said. Paddy harvesting takes 20 to 25 days and if farmers start it on October 11, it will stretch into the beginning of November.

The ideal time of wheat sowing is from November 1 to 15, and planting for normal varieties should not be done later than November 25. To clear the fields for wheat sowing, farmers are certain to go for burning of the paddy stubble, which stands 12 to 15 inches in the fields after harvesting.