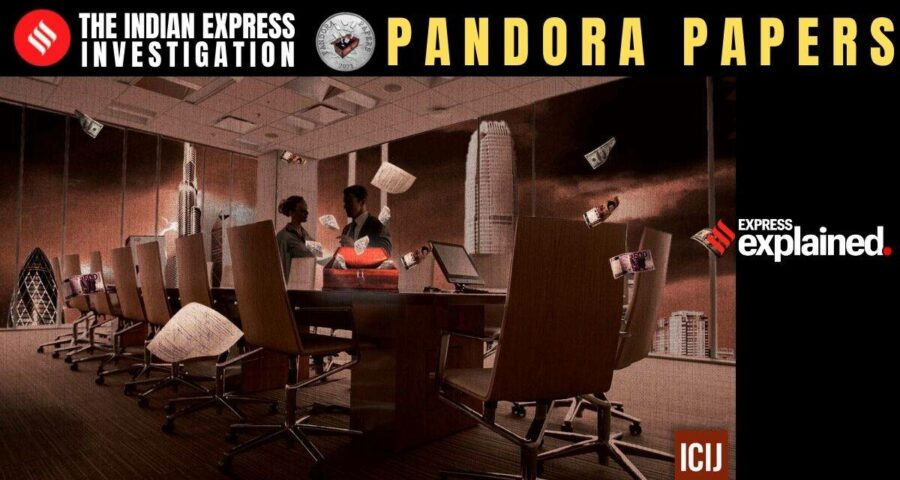 These are 11.9 million leaked files from 14 global corporate services firms which set up about 29,000 off-the-shelf companies and private trusts in not just obscure tax jurisdictions but also countries such as Singapore, New Zealand, and the United States, for clients across the world. 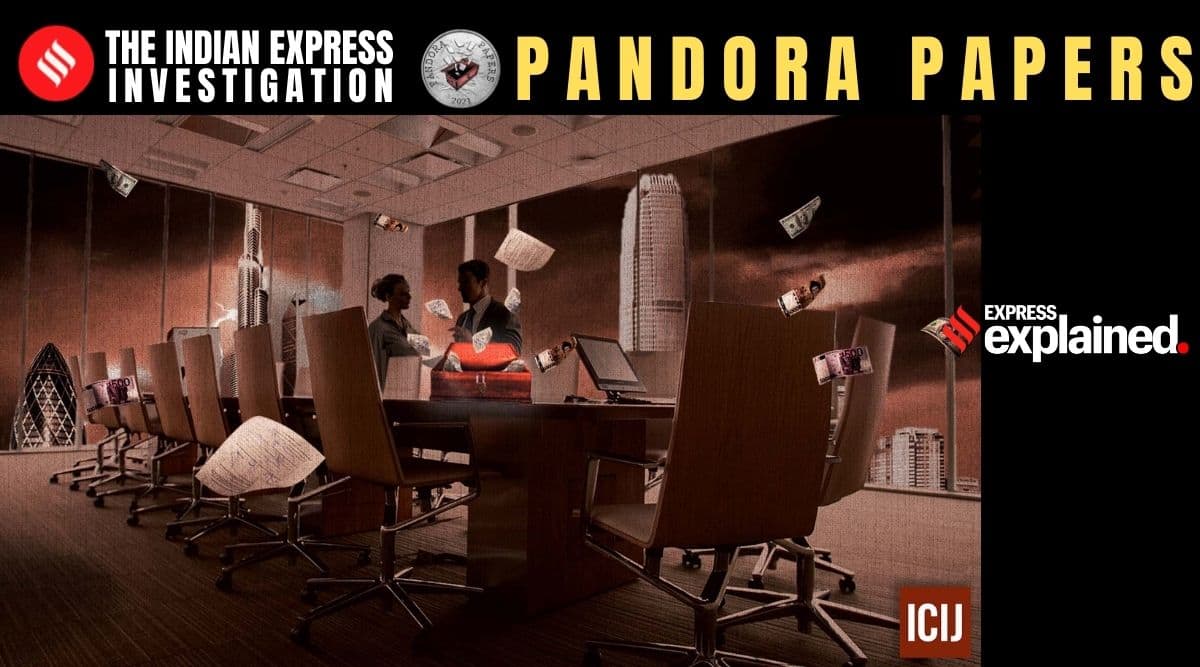 There are at least 380 persons of Indian nationality in the Pandora Papers. Of these, The Indian Express has so far verified and corroborated documents related to about 60 prominent individuals and companies. What do the Pandora Papers say about these entities? Also, if trusts are not illegal, what is the investigation about?

What are the Pandora Papers?

These are 11.9 million leaked files from 14 global corporate services firms which set up about 29,000 off-the-shelf companies and private trusts in not just obscure tax jurisdictions but also countries such as Singapore, New Zealand, and the United States, for clients across the world.

These documents relate to the ultimate ownership of assets ‘settled’ (or placed) in private offshore trusts and the investments including cash, shareholding, and real estate properties, held by the offshore entities. There are at least 380 persons of Indian nationality in the Pandora Papers. Of these, The Indian Express has so far verified and corroborated documents related to about 60 prominent individuals and companies. This is an ongoing investigation.

What do the Pandora Papers reveal?

The Pandora Papers reveal how the rich, the famous and the notorious, many of whom were already on the radar of investigative agencies, set up complex multi-layered trust structures for estate planning, in jurisdictions which are loosely regulated for tax purposes, but characterised by air-tight secrecy laws.

The purposes for which trusts are set up are many, and some genuine too. But a scrutiny of the papers also shows how the objective of many is two-fold: i) to hide their real identities and distance themselves from the offshore entities so that it becomes near impossible for the tax authorities to reach them and, ii) to safeguard investments — cash, shareholdings, real estate, art, aircraft, and yachts — from creditors and law enforcers.

How is Pandora different from the Panama Papers and Paradise Papers?

The Panama and Paradise Papers dealt largely with offshore entities set up by individuals and corporates respectively. The Pandora Papers investigation shows how businesses have created a new normal after countries have been forced to tighten the screws on such offshore entities with rising concerns of money laundering, terrorism funding, and tax evasion.

The Pandora Papers pierce the corporate veil and reveal how trusts are prolifically used as a vehicle in conjunction with offshore companies set up for the sole purpose of holding investments and other assets by business families and ultra-rich individuals. The trusts can be set up in known tax havens such Samoa, Belize, Panama, and the British Virgin Islands, or in Singapore or New Zealand which offer relative tax advantages, or even South Dakota in the US, the biggest economy.

What is a trust?

A trust can be described as a fiduciary arrangement where a third party, referred to as the trustee, holds assets on behalf of individuals or organisations that are to benefit from it. It is generally used for estate planning purposes and succession planning. It helps large business families to consolidate their assets — financial investments, shareholding, and real estate property.

A trust comprises three key parties: ‘Settlor’ — one who sets up, creates, or authors a trust; ‘trustee’ — one who holds the assets for the benefit of a set of people named by the ‘settlor’; and ‘beneficiaries’ — to whom the benefits of the assets are bequeathed.

A trust is not a separate legal entity, but its legal nature comes from the ‘trustee’. At times, the ‘settlor’ appoints a ‘protector’, who has the powers to supervise the trustee, and even remove the trustee and appoint a new one.

Is setting up a trust in India, or one offshore/ outside the country, illegal?

No. The Indian Trusts Act, 1882, gives legal basis to the concept of trusts. While Indian laws do not see trusts as a legal person/ entity, they do recognise the trust as an obligation of the trustee to manage and use the assets settled in the trust for the benefit of ‘beneficiaries’. India also recognises offshore trusts i.e., trusts set up in other tax jurisdictions.

If it’s legal, what’s the investigation about?

This is a very valid question. True, there are legitimate reasons for setting up trusts — and many set them up for genuine estate planning. A businessperson can set conditions for ‘beneficiaries’ to draw income being distributed by the trustee or inherit assets after her/ his demise.

For instance, while allotting shares in the company to say, four siblings, the father promoter set conditions that a sibling can get the dividend from the shares and claim ownership of the shares, but not sell it without offering the first right of refusal to the other three siblings. This could be to ensure ownership of the enterprise within the family.

But trusts are also used by some as secret vehicles to park ill-gotten money, hide incomes to evade taxes, protect wealth from law enforcers, insulate it from creditors to whom huge moneys are due, and at times to use it for criminal activities. The Indian Express investigation reveals this.

So, why are trusts set up? And why overseas? What should you also know?

Overseas trusts offer remarkable secrecy because of stringent privacy laws in the jurisdiction they operate in. A lot depends on the intention behind setting up an offshore trust — and if the taxman can provide evidence that suggests mala fide intent by the trust, then the courts tend to back the tax department in their attempt to recover the taxes due.

From the investigation, some key tacit reasons why people set up trusts are:

i) Maintain a degree of separation: Businesspersons set up private offshore trusts to project a degree of separation from their personal assets. A ‘settlor’ (one who sets up/ creates/ authors) of a trust no longer owns the assets he places or ‘settles’ in the trust. This way, he insulates these assets from creditors.

This is best illustrated through an example: A real estate promoter sets up an offshore trust, which sits on top of four offshore entities holding some assets. Now, private equity investors drag various entities of the real estate group to the National Company Law Tribunal under the bankruptcy law. So do homebuyers who have invested in residential properties by this company. But the Pandora Papers show the promoter moved tens of millions of dollars in assets to the trust amid police complaints in Delhi by his foreign investors, alleging siphoning off funds to the tune of hundred-plus million dollars. His wealth moved to an offshore trust remains safe from creditors.

ii) Hunt for enhanced secrecy: Offshore trusts offer enhanced secrecy to businesspersons, given their complex structures. The Income-Tax Department in India can get to the ultimate beneficial owners only by requesting information with the financial investigation agency or international tax authority in offshore jurisdictions. The exchange of information can take months.

iiii) Avoid tax in the guise of planning: Businesspersons avoid their NRI children being taxed on income from their assets by transferring all the assets to a trust. The ownership of the assets rests with the trust, and the son/ daughter being only a ‘beneficiary’ is not liable to any tax on income from the trust.

In many business families, children have one foot abroad, hence family patriarchs have increasingly looked at trusts to ensure a hassle-free transfer of assets into their children’s hands.

iv) Prepare for estate duty eventuality: There is pervasive fear that estate duty, which was abolished back in 1985 when Rajiv Gandhi was Prime Minister, will likely be re-introduced soon. Setting up trusts in advance, business families have been advised, will protect the next generation from paying the death/ inheritance tax, which was as high as 85 per cent in the more than three decades after its enactment (The Estate Duty Act, 1953). Although India does not have a wealth tax now, most developed countries including the US, UK, France, Canada, and Japan have such an inheritance tax.

v) Flexibility in a capital-controlled economy: India is a capital-controlled economy. Individuals can invest only $250,000 a year under the Reserve Bank of India’s Liberalised Remittance Scheme (LRS). To get over this, businesspersons have turned NRIs, and under FEMA, NRIs can remit $1 million a year in addition to their current annual income, outside India. Further, the tax rates in overseas jurisdictions are much lower than the 30% personal I-T rate in India plus surcharges, including those on the super-rich (those with annual income over Rs 1 crore).

vi) The NRI angle: Offshore trusts, as noted earlier, are recognised under Indian laws, but legally, it is the trustees — not the ‘settlor’ or the ‘beneficiaries’ — who are the owners of the properties and income of the trust. An NRI trustee or offshore trustee taking instructions from another overseas ‘protector’ ensures they are taxed in India only on their total income from India.

Of late, NRIs are under greater scrutiny of the Income-Tax Department; they have been receiving notices to prove their non-resident status of past years, to check if they made the required disclosure of ‘foreign assets’ in years when they were ordinarily resident in India.

Can offshore Trusts be seen as resident Indian for tax purposes?

There are certain grey areas of taxation where the Income-Tax Department is in contestation with offshore trusts. After The Black Money (Undisclosed Foreign Income and Assets) and Imposition of Tax Act, 2015, came into existence, resident Indians — if they are ‘settlors’, ‘trustees’,  or ‘beneficiaries’ — have to report their foreign financial interests and assets. NRIs are not required to do so — even though, as mentioned above, the I-T Department has been sending notices to NRIs in certain cases.