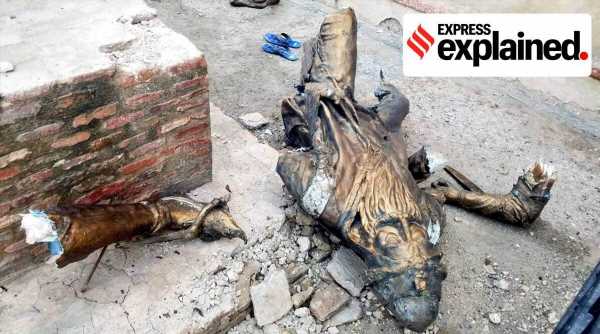 A nine-foot-tall bronze equestrian statue of Maharaja Ranjit Singh, the founder of the Sikh Empire, was vandalised in Lahore Fort earlier this week. Who was he, and why is he admired? A nine-foot-tall bronze equestrian statue of Maharaja Ranjit Singh, the founder of the Sikh Empire, was vandalised in Lahore Fort earlier this week.

A man who was identified in the Pakistani media as Rizwan, a member of far right Islamist party Tehreek-e-Labbaik Pakistan (TLP), tore off the statue’s left arm and pushed it off the horse before he was pulled away by another man and restrained by a few others.

A video of the vandalism was circulated widely, and Fawad Chaudhry, the Pakistani federal minister for Information and Broadcasting posted on Twitter, “#Shameful this bunch of illiterates are really dangerous for Pakistan image in the world”.

Dawn reported the vandal had been arrested, and quoted Lahore’s Capital City Police Officer Ghulam Mahmood Dogar as saying “strict legal action” would be taken against him.

The following day, the Pakistan Foreign Office retorted that India’s “unwarranted and gratuitous remarks” on the incident were akin to “feigning concern” and “highly hypocritical” given its “state-sponsored discrimination” against its own minorities, Dawn reported.

Lahore, once among the biggest and most developed of the cities of Punjab, was in a shambles at the time — the dying Mughal Empire was no longer able to extend it patronage and protection, it was battered by repeated assaults from bands of Afghan raiders, and weakened by infighting among some Sikh groups. Residents of Lahore complained of being forced to pay exorbitant taxes.

Ranjit Singh brought peace and security to Lahore and revived its economic and cultural glory. He proclaimed himself maharaja of the Punjab in 1801, and proceeded to rule with religious tolerance for communities other than Sikhs.

He carried out repairs to the Lahore fort — which was built by Emperor Akbar at the site of an older mud-brick structure and was subsequently beautified and expanded by Shah Jahan and Aurangzeb — and built a wall around it, and used a part of the fort as his residential quarters.

As the founder of a mighty empire that sprawled over a large part of northwestern India, the Maharaja is identified by many with the identity of Punjab.

Around a decade ago, Pakistani video bloggers started to paint a glowing portrait of the Maharaja on platforms such as YouTube. They underlined Ranjit Singh’s ‘secular’ values, and recalled his appointment of several Hindu and Muslim ministers. They recalled that he had handed over the famous Sunehri Masjid of Lahore, which had been converted into a Gurdwara by some Sikh militias, back to Muslims, and had funded its renovation.

The statue at the Fort

A sustained campaign by social media activists, the Punjabi diaspora, especially Sikhs, and several small but vocal political groups culminated in the installation of Ranjit Singh’s bronze statue at Lahore Fort in June 2019 on the occasion of the Maharaja’s 180th death anniversary. The life-size statue was gifted to the Walled City of Lahore Authority (WCLA) by SK Foundation UK, an organisation based in the United Kingdom. Gurdwara Dera Sahib, built on the spot where the fifth Sikh guru Arjan Dev was martyred, and Ranjit Singh’s samadhi, located adjacent to the Lahore Fort, draw a large number of Sikh tourists from across the world.

Attacks on the statue

Critics in Pakistan complain that the WCLA made the decision to instal the statue without due consultation, and that it was driven by commercial considerations. The threat to the statue has, however, come from political quarters, especially Islamists and fundamentalists.

The MEA’s official spokesperson noted that Tuesday’s vandalism was “the third such incident wherein the statue has been vandalised, since it was unveiled in 2019”.

In August 2019, not long after the inauguration of the statue, “two men struck it with wooden rods, resulting in the breakage of one of its arms and damage to other parts”, Dawn reported. The attackers raised slogans against the August 5, 2019 constitutional changes in Jammu and Kashmir, the report said.

In December 2020, a man broke an arm of the statue. This man, who was arrested, told police that “Ranjit Singh’s statue should not have been built as he had committed atrocities against Muslims during his rule”, Dawn reported.