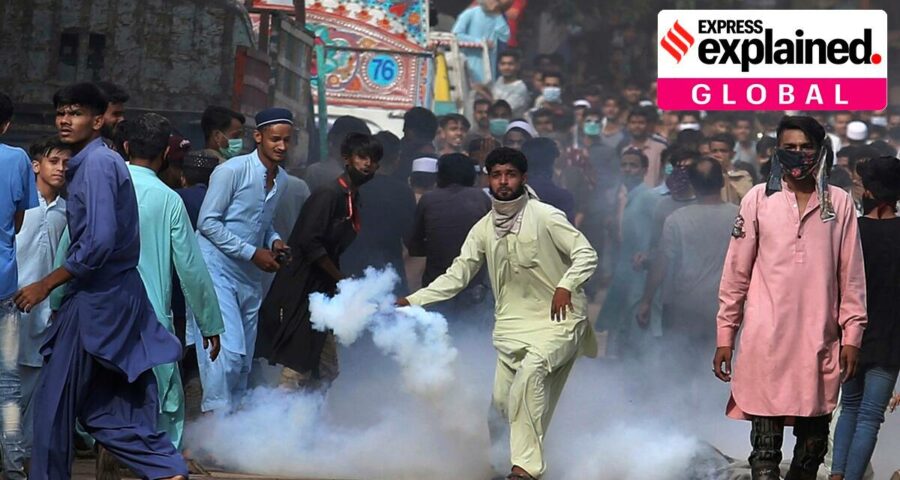 Birthed only five years ago, the TLP has so far managed to come out a winner from every stand-off. Any hope Pakistan might have had in November 2020 that the death of Khadim Hussain Rizvi would lead to the disintegration of the Tehreek e Labbaik Pakistan (TLP), the extremist outfit that he headed, has evaporated. Repeatedly, Pakistan has made bargains with religious extremists, believing their existence serves some larger strategic nation-preserving purpose. Each time, these turn out to be bad bargains. Its dealings with the TLP follow the pattern.

On April 12, the Pakistan government arrested Saad Hussain Rizvi, the son of Khadim Hussain, who took over leadership of the group after his father’s death, for mobilising followers across the country to protest against the government’s unkept promises to the group.

That triggered widespread and violent protests all of last week, mainly in Rawalpindi, Islamabad, and Lahore, in Pakistan’s Punjab province. Four policemen were killed in the clashes, and over 800 were injured. On April 15, the government slapped a ban on the group, including it in its list of proscribed terrorist organisations under its Anti Terrorism Act.

By the weekend, the TLP had taken a total of 11 policemen hostage at Lahore. By Sunday, the government was back to negotiating with the now banned group for the freedom of the captured policemen. Early on Monday, following negotiations, the TLP released the policemen. More talks will follow, Pakistan’s Interior Minister Sheikh Rashid Ahmed said, on the group’s four demands: the release of Saad, the removal of the ban on the group, the dropping of cases against all members of the TLP and release of all arrested members, and the expulsion of the French Ambassador to Pakistan.

The present agitation and the demand that Pakistan sever diplomatic ties with France goes back to a protest by the group in November 2020. Khadim was still alive then. He summoned a huge rally to march on Islamabad from Rawalpindi to make the point that Pakistani Muslims were wounded by French President Emmanuel Macron’s landmark speech on Islam, in which he defended the right to caricature the Prophet Muhammad as integral to freedom of expression and French secularism.

Prime Minister Imran Khan had strongly attacked the speech then. But the TLP wanted decisive action, not words. Their demand was that Pakistan should send the French Ambassador back to his country, and not send its own envoy to Paris.

As police tried to stop that massive rally with tear gas and lathis, there was rioting. The rallyists sat on dharna on an arterial road between the two cities, blocking off access to the Pakistani capital, while Khadim, who would spout the poetry of Iqbal and choice Punjabi abuses with equal ease, gave fiery speeches from Karachi.

The government finally caved in. Then Interior Minister Brig. (retd) Ijaz Shah purportedly signed off on a written assent that Parliament would decide on the expulsion of the French diplomat within three months, and on the demand that Pakistan should not station an Ambassador in Paris. It would release all TLP workers who had been arrested in the clashes, and not register any cases against them.

Khadim died hours after declaring victory, likely due to Covid-19. His son Saad was anointed leader of the TLP within days. Though the government did not confirm the written agreement, it did not deny it either.

In January, Saad reminded the government of its promise about sending back the French Ambassador, warning that three months would end on February 17. Five days before the deadline, the government reached another agreement with the TLP that it would place the matter before Parliament before April 20.

In the first few days of April, the government was in negotiations with TLP, but as a large crowd of men started gathering ominously in Rawalpindi, the government decided to arrest Saad. That led to a week of clashes and rioting in Rawalpindi and Lahore, policemen were killed and wounded, and the hostage situation arose.

With the agitation, the hitherto inexperienced Saad has proved to TLP followers that he is his father’s worthy successor. The TLP may well emerge stronger from the latest standoff.

The rise of this extremist group has been unique even for Pakistan, where the security establishment is the last word in determining which extremist groups are “good” — meaning serves its interests, both internal and external, and therefore should be allowed to grow and entrench itself — and which are “bad”, that is, those that attack its interests.

The TLP was not in the “bad” category to begin with, or so it appeared from the extraordinary street power it was able to muster within no time, and the manner in which it targeted former Prime Minister Nawaz Sharif’s democratically elected government in 2016 and, after his mid-term ouster, the successor government of his PML(N) in 2017.

Birthed only five years ago, the TLP has so far managed to come out a winner from every stand-off. The group was founded after the hanging of Mumtaz Qadri, the police bodyguard who in January 2011 killed Salman Taseer, the then Governor of Pakistan’s Punjab province. Khadim had been a supporter of Qadri.

A government appointed cleric at a mosque in Lahore, Khadim started the Tehreek Rihai Mumtaz Qadri (Movement to Free Mumtaz Qadri) right after Qadri was taken into custody and jailed for the assassination. Following Qadri’s judicial execution in February 2016, Rizvi renamed the movement Tehreek-e-Labbaik Ya Rasoolullah (TLYRA) in 2016. Before the Pakistan general elections of 2018, it morphed into a political party called Tehreek-e-Labbaik Pakistan, which contested the elections and won two seats in the Sindh Assembly.

Khadim Rizvi was different from the other extremists who have risen in Pakistan over the last three decades. He was not a Deobandi like the Taliban, nor an Ahle Hadees like the Lashkar-e-Taiba’s Hafiz Saeed. The TLP is a Barelvi movement. Most Barelvis are viewed as middle-of-the-road, moderate Sunni Muslims. Half of Pakistan identifies as Barelvi, whose practice of Islam is suffused more with Sufi traditions prevalent across South Asia, than with the Saudi Wahhabism that reigns over jihadi tanzeems.

But in common with all Muslims, Barelvis too hold that there can be no forgiveness for blasphemers, which includes those who question the finality of the Prophet.

Khadim channelled this commonly-held belief, weaponised it for his political ends, and turned it into raw street power. He did not have to indulge in terrorist violence, yet was more successful than any other extremist group in getting much of the Sunni majority in the country to rally behind his causes. His biggest success was in forcing governments to abandon the idea of reforming the draconian blasphemy laws. Relations with the Pak Army

Khadim also made it clear that he believed more in the Pakistan Army than in politicians. It was the Pakistan Army that brokered the deal between the government and the TLP which led to the calling off of the latter’s siege of the capital in 2017. For the government, it was a surrender. A minister had to apologise and resign. As the triumphant rallyists dispersed, an army general handed them envelopes of cash. Khadim was also critical of Nawaz Sharif for his anti-Army positions.

The latest standoff is a harvest of all the previous dealmaking with the TLP. Imran Khan, then an opposition leader, had encouraged the 2017 siege of Islamabad, pleased at how the ruling PML(N) was cornered. In November 2020, Imran’s attack on Macron for his speech, saying it would encourage radicalisation and divisions, and that it had hurt the feelings of millions of Muslims across the world, raised expectations that he would proactively do something to follow up on his words. As likely did the government’s deal with the TLP that the National Assembly would take a call on relations with France in three months.

On Monday, Imran had to tamp down on those expectations, making the case that cutting off ties with France, as the TLP was demanding, was not a feasible option for the country’s economy. It would hurt Pakistan more than it would hurt France. The EU is the largest market for Pakistan’ textile exports. Severing diplomatic relations with France would affect ties with the EU, would lead to the closure of factories, and unemployment in Pakistan, he said.

How this message goes down will become evident in the coming days. The ban itself may not help. In the coming days the TLP could also find itself stripped of its status as a political party. All this could end up adding to its popularity.

When an extremist group goes from “good” to “bad” in the eyes of the Pakistani security establishment, “proxy of India” is the ready allegation offered to explain this fall from favour. That is also a sure way to ensure that it loses public favour. Imran Khan did not go so far as to suggest this, but he did allege that out of the 400,000 Twitter handles analysed to understand last week’s violence, 70 per cent were fake, and some 380 of these fake news peddling handles had originated in India.

On Sunday, the Tehreek e Taliban Pakistan (TTP), a group that has the capacity to unleash terrorist violence across Pakistan, offered its support to the TLP. The TTP has already been painted by the Pakistani security establishment as an Indian intelligence operation. If the problem continues, it would be a matter of time before the TLP too is projected in the same colours.

(With inputs from Zeeshan Shaikh)