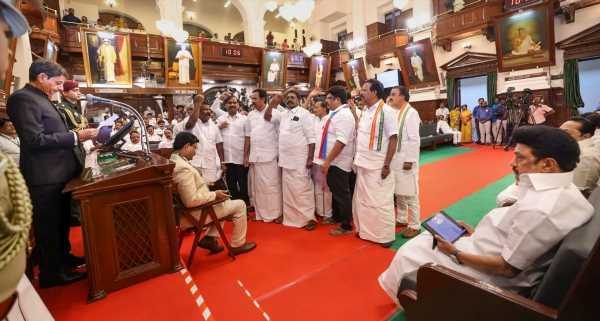 On Monday, January 9, 2023, a confrontation not witnessed in recent times occurred in the Tamil Nadu assembly when the state’s governor walked out of the legislature in protest.

It began when Governor Ravindra Narayana Ravi — a retired Indian Police Service officer of the Kerala cadre — began to read out the governor’s address to the state assembly.

As convention goes, the speech was written by the ruling Dravida Munnetra Kazhagam and Ravi, as governor, was duty bound to read it to the assembly.

The problem commenced after Ravi omitted portions of the speech.

This angered Chief Minister M K Stalin and other DMK leaders who felt this gubernatorial breach of convention was not correct.

Ravi began the omissions with the 12th point of the speech where the state government stated, ‘This Government accords highest priority to maintenance of law and order in the State and is taking all necessary measures to ensure that the State continues to be a haven of peace and tranquillity, free from any form of violence.

‘With utmost concern for the future of our youth, the Hon’ble Chief Minister is determined to crack down on the distribution and consumption of drugs and narcotic substances with an iron hand. This Government is continuously taking measures to prevent drug smuggling including stringent enforcement of law and awareness creation among people.’

Ravi also omitted point 64 which stated: ‘Since this Government took office … In 2021, the State was severely affected by heavy flooding and rains, and normal life was disrupted. Based on the learnings of that disaster, this Government has effectively managed the recent cyclone and rains.

‘The State’s economy was in doldrums due to several reasons including Covid. Within the last year and a half, due to the economic reforms, welfare schemes and development works carried out by this Government, the economy has been revived and the State has been marching ahead in the path of development.

‘Because of stellar management of law and order, Tamil Nadu continues to be a haven of peace. As a result, the State is attracting numerous foreign investments and is becoming a forerunner in all sectors.’

Point 65, which Ravi ignored, stated: ‘This Government is founded on the ideals of social justice, self-respect, inclusive growth, equality, women empowerment, secularism and compassion towards all.

‘Following the principles and ideals of stalwarts like Thanthai Periyar, Annal Ambedkar, Perunthalaivar Kamarajar, Perarignar Anna and Muthamizh Arignar, Kalaignar, this Government has been delivering the much-acclaimed Dravidian model of governance to its people.’

After Chief Minister Stalin moved a resolution, even as Ravi was speaking, that the speech was read, the governor walked out of the assembly. 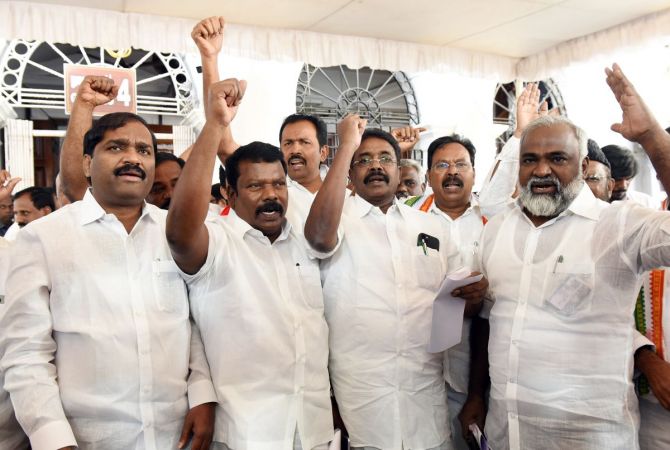 Raj Bhavan sources said later that Ravi was irked because the prepared texts cited more of DMK ideology and was not factually correct.

The BJP unsurprisingly came out in Ravi’s support. ‘Do you want the governor to speak only what you think? What took place in the Tamil Nadu assembly was a personal attack on the governor,’ declared Vanathi Srinivasan, the lone BJP MLA.

BJP Tamil Nadu President Kuppuswamy Annamalai, a former IPS officer like Ravi, tweeted that the chief minister ‘intervening’ in the governor’s address with a motion when the governor was still in the assembly was disrespectful. Ravi and DMK government have been on a collision course for well over a year now.

Last November, the state government urged President Droupadi Murmu to dismiss Ravi as Tamil Nadu governor. Before he moved to Chennai, Ravi was Nagaland governor where he ran foul of Naga rebel groups who reportedly considered him an impediment to finding a solution to the more than 60-year-old Naga insurgency.

Ravi’s conduct is not in accordance with his Constitutional responsibilities, the DMK government pointed out, as he has not signed 20 Bills passed by the Tamil Nadu assembly.

Last week, on January 4, Ravi angered the DMK by suggesting that Tamil Nadu’s name be changed to Tamizhagam as it was a more appropriate name for the state.

Ravi’s remark was yet another attempt no doubt to irk Stalin and the DMK, which the governor’s mentors in New Delhi see as hostile to its political ambitions in Tamil Nadu.