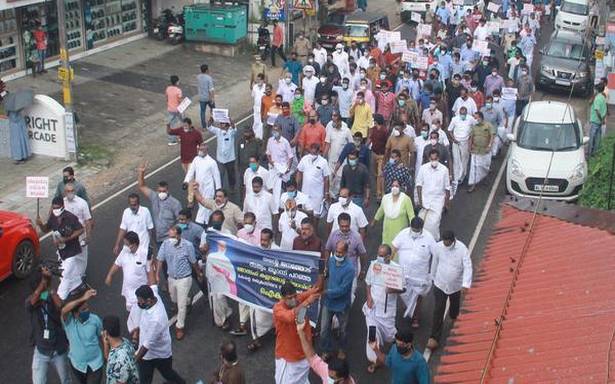 The sleepy town of Pala has begun boiling over in a mood of hostility with Muslim organisations and Christian groups mobilising and taking out protest marches.

In his address on the Eight day lent of Mary, Bishop Mar Joseph Kallarangatt set forth with terseness a growing sentiment among the Christians, especially catholics, across Central Travancore.

The Bishop, who a couple of weeks ago had issued a circular to parishes warning young christian women of entrapment by fraudsters, came out in the open accusing a section of Muslims targeting Christians through love jihad and narcotic jihad.

These groups, according to him, have cast their nets over places including schools, colleges, training centres and even commercial establishments and are using strategies that are bafflingly difficult to pin down.

The concepts he spoke about were not entirely new; it has some precedents in the reports issued by the Syro-Malabar church in January last year.

Yet, it was for the first time that these were given the force of a religious sermon.

The remarks, expectedly, has sparked a debate but what followed it was the least foreseen — Muslim organisations taking out a march against the Bishop to his seat in Pala.

This, in turn, caused an unprecedented mobilisation of the Christian groups, supported by a section of politicians, on the other side.

All of a sudden, the sleepy town of Pala has begun boiling over in a mood of hostility.

The widening trust deficit between Christians and the Muslims across the Central Travancore is on ample display along its streets now.

While the opinions have differed as to the actual intention behind those statements, it has been generally interpreted as the culmination of an incremental strategy adopted by the church in raising the perceived threats from the jihadists to the public domain.

As per reports, the Bishop’s statements were indeed intended to legitimize a concern flagged by a synod of the Syro-Malabar church some time ago.

Amidst the raging criticisms from different quarters including that of the Chief Minister Pinarayi Vijayan and the Opposition leader VD Satheesan, the church has stood its ground with explicit support from the Kerala Catholic Bishop Council.

Deepika, the official mouthpiece of the church, published back to back articles questioning the integrity of those , the media included, in “creating a fuss” over the Bishop warning his community members.

But considering the position of Catholics as a crucial vote bank in Central Travancore, the controversy has left the leading political parties on the ruling front as well as the opposition camp most vulnerable.

The BJP and the Kerala Janapaksham led by PC George have already joined this rising tide of rebellion as the unfolding episode best suits their interests.

Pala legislator Mani C Kappen too has voiced his support to the Bishop, raising his objection on dragging the issue to the streets.

The Congress and the CPI(M), which leads the two leading coalitions, however, have begun treading cautiously after the initial criticisms.

The position of Kerala Congress factions on both sides, which essentially thrive on the Christian vote bank in the region, appear to have forced them, or so it seems, to soften their criticisms of the Bishop’s remarks.

While some leaders of both the KC parties have come in support of the church in their individual capacity, all eyes are now on the KC(M) chairman Jose K Mani, a politician having strong ties with the Bishop House in Pala.