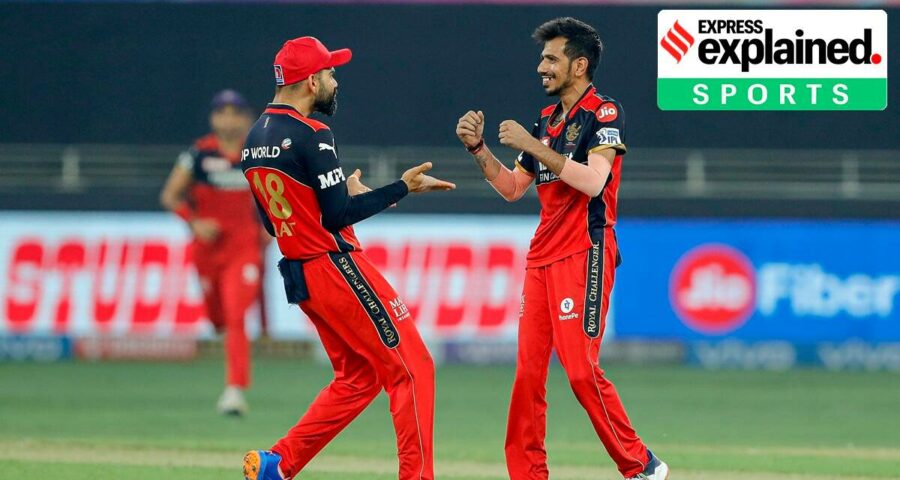 In each of RCB’s four IPL games, Yuzvendra Chahal has been an irresistible force, and has been both plucking wickets and plugging the flow of runs. Leg-spinner spinner Yuzvendra Chahal has returned from the pandemic-induced break in the IPL refreshed and revived, taking the World T20 snub on his chin and reemerging as the match-winner he had been in the past. In each of RCB’s four games, Chahal has been an irresistible force, and has been both plucking wickets and plugging the flow of runs, so much so that his country could end up regretting his absence in the World Cup that begins next month.

This raises the big question: Was India too hasty in discarding Chahal?

How does his IPL stats compare, before and after the break?

In four games post-break, he has already nabbed more wickets than he had in seven games before in the first leg (seven as opposed to four). Every other form-gauging metric has staggeringly improved. In the first instalment, every wicket cost him 34.5 balls, which is almost a wicket in six overs. and 47.5 runs. Since resumption, he has grabbed a wicket in every twelve balls and for every 11 runs conceded. If he bled 8.26 runs an over pre-interval, he has kept it around six an over (in the last two games, he has given away only 3.5 runs an over while picking 5 wickets). Suffice it to say that the desert has been a career-reviving oasis for him.

What has changed in him?

A little reduction of pace has benefitted. If you had watched him in the India-leg, you would notice that he was quicker— his action and deliveries. His attempt to bowl faster culminated in him straying on the fuller side, and his endeavour to shorten his length resulted in him gifting too many short balls, on either side of the wicket. His attempt to bowl slower ensued in him bowling too slow. More worryingly, he lost the delicious loop—he never flighted the ball much, but the loop he conjured was a close ally. But in UAE, he has managed to find that ideal pace (87 to 92 kph bandwidth, whereas in the India leg his pace oscillated between 84 and 95 mph). He could credit less stiff shoulders, a more loose-limbed release of the ball and less quick run-up. To hurry the run-up is a tendency for many spinners who wants to bowl faster than they naturally are. In the process, they stiffen their shoulders, which has a ripple-on effect on the release. He ends up pushing the ball at the batsman, compromising on the ball’s air-time, and thus on loop/flight, dip and turn. Chahal could purchase neither side-spin nor (his most trusted friend) over-spin. Once he rediscovered that ideal pace, he naturally found his ideal length (between a fuller and spinner’s good length), a better command of line, and over-spin, which lets him get more bounce and skid than most think he could.

What did he do in the break?

He sought the counsel of coaches, tagged along friend and off-spinner Jayant Yadav to the training ground, began bowling with one stump, and went through scores of his footages. In his own words: “I reviewed my bowling but I did not want to make too many changes. I wanted to look at the finer points like which line I must focus more on, whether I should bowl wider or stump-to-stump. I sat with (Bharat) Arun sir, Paras (Mhambrey) sir, and Rahul (Dravid) sir. I saw the videos, what I am missing that I have been doing so well.” There were enough signs in the whistle-stop tour to Sri Lanka that he was closer to complete revival.

Has the pitch in Dubai aided him?

The strip has been comparatively sluggish and the ground dimensions slightly larger, which invariably has suited his natural pace and ploys. But at his peak, he transcends the nature of the ground and its dimensions. More often than not, he gets his wickets with a union of his brain and fingers, with sharp thinking and sharper execution. He is quick to size up which lengths and lines would work and which would not on a particular pitch and against a specific batsman. He deconstructed his two wickets against Rajasthan Royals, Mahipal Lomror and Liam Livingstone. “I knew he was coming out of his crease, and I had watched his videos so I knew he was very good on the leg side, and then I planned, okay, if he’s coming out, I’ll bowl wider, let him hit over cover,” Chahal said in the post-match interaction. Against Livingstone, he plotted a different plan. “As the shorter boundary is on the leg side, I wanted him to hit over cover, because the bigger boundary is on that side, and I don’t want to bowl faster, I just want to bowl a little bit slower to him.” Thus a flexible mindset too.

Would India miss him in the World Cup?

The form he is in, and combined with the form some of those in the squad have been in this leg, it would not be a knee-jerk presumption that India could potentially miss his trickery and wicket-grabbing verve. Not because those in the squad are under-performing—on the contrary, Ravindra Jadeja has been his usual resourceful self, Ashwin has been steady without being spectacular, and Varun Chakravarthy had been neat, though his mystery-spin has not yielded a harvest of wickets, it has kept batsmen quiet. But Chahal certainly looks in a better groove than the slightly undercooked Rahul Chahar, who in the leg has picked up just two wickets for 116 runs, and conceded eight-plus an over in two of his last three games. Not just numbers, in the present form, he has not looked half a force as Chahal has been.