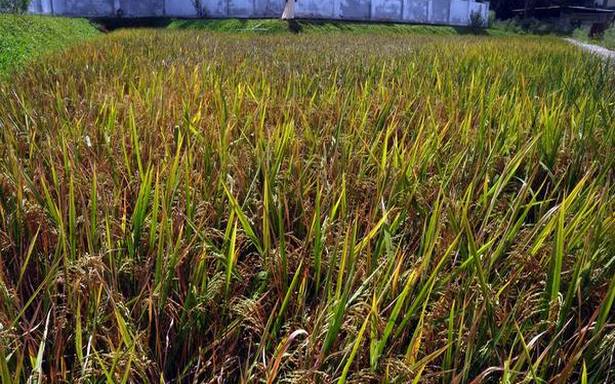 When candy giant Mars Wrigley carried out a mass recall of several batches of its Crispy M&Ms across Europe this August, it was due to the use of one ingredient: rice flour with genetically modified (GM) contamination that allegedly originated in India, according to notifications on the European Commission’s rapid alert system.

However, the Commerce Ministry pointed out that GM rice is not grown commercially in India, let alone exported, and promised a thorough enquiry by its agricultural exports authority. The Ministry alleged that the case was a “futile conspiracy to malign the image of India as a reliable food security provider”.

Worried farmers groups and environmental activists, however, noted that multiple GM rice varieties have been approved for confined field trials, and warned that any cross-contamination could dampen the country’s agricultural export ambitions.

India’s annual rice exports amount to 18 million tonnes worth ₹65,000 crore, and reach more than 75 countries, according to the Ministry.

According to the European Commission’s Rapid Alert System for Food and Feed, 500 tonnes of broken rice imported from India and converted into rice flour by a French company named Westhove was flagged during a regular check. On June 21, France issued a notification for unauthorised genetically modified rice flour, identifying India as the point of origin, and alerting Austria, Belgium, the Czech Republic, Germany, Italy, Netherlands, Poland, Spain, the United Kingdom and the United States as the possible destination of products made with the flour.

In a statement on August 4, Mars Wrigley announced that it was recalling four packaging sizes of its Crispy M&Ms product with two affected best-before dates. According to German NGO site Informationdienst Gentechnik, the European Commission announced that 144 tonnes of the contaminated rice flour had been processed by Mars, while more flour went into 11 types of baked goods manufactured in Italy and further distributed to other countries, all of which were recalled.

Commerce Ministry spokesperson D.J. Narain said that the whole issue appeared to be “infructuous”. He pointed out that “the GM ingredient may have been added in Europe to cut costs, not in India where commercial GM cultivation is banned. The quantity involved is too big to have come from leaked output from controlled trial cultivation.”

However, he also added that “APEDA is collecting all the details and will enquire every aspect of it thoroughly with the technical and scientific institutions like GEAC and strictest form of action will be taken accordingly.”

Farmers groups say the issue of cross contamination from field trials has been raised previously. “The issue with GM field trials is that once they take place, they can contaminate crops long after the actual trials either directly or through seed leakages,” said a letter from the Coalition for GM-Free India, sent on Tuesday to authorities at the Environment, Agriculture and Commerce Ministries. It pointed to a 2006 case, where a Bayer food trial contaminated rice and seeds in the U.S., leading to a plunge in exports from that country.

“Back in 2007, when there was widespread concern about GM rice trials and the possibility of cross contamination, the All India Rice Exporters Association took up the issue with the Department of Biotechnology and the Genetic Engineering Appraisal Committee. A policy decision was taken that field trials would not be allowed in the basmati belt, because of worries that the export crop could be affected,” said Rajesh Krishnan, a Kerala paddy farmer who is a member of the Coalition and represents a group of organic rice farmers who exported 50 tonnes last year.

“At that time, India’s rice trade amounted to just ₹7,000 crore; today, it is more than ₹63,000 crore. At the end of the day, it is Indian farmers and exporters who have much to lose.”

He also noted that unauthorised HtBt Cotton and Bt Brinjal are already being grown commercially, with hundreds of growers blatantly defying the governmental ban. “When no action is taken against such brazen violations, it creates the image of a country which is not serious about heatth or its food supply chain and that is not good for exports,” said Mr. Krishnan.

The Coalition demanded a ban on field trials, slapping liability for illegal release of GMOs into the environment on developers, and a probe to identify the source of the GM rice contamination among other steps to deal with the problem.

Commerce Ministry spokesperson Mr. Narain emphasised that there was little danger to India’s agricultural export image. “It may be noted that India’s export orders remain globally growing. India is fast emerging as the world’s most trusted business partner and investment destination. Emergence of ‘Brand India’ is an outcome of cumulative national endeavor towards moving to world class excellence in quality and growth,” he said.

“One such stand-alone said incident does not change the unprecedented positive perception of Brand India. There is nothing so sensational about it,” added Mr Narain.