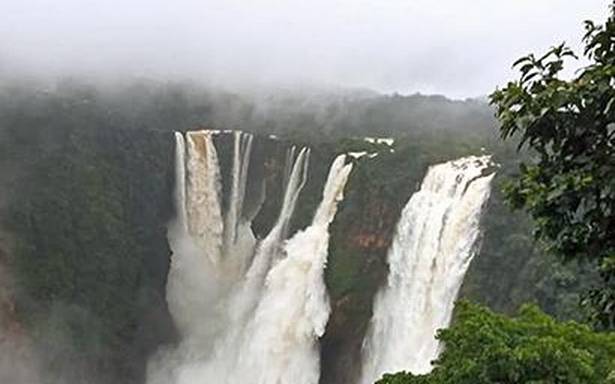 The State Government’s decision to take up development works, including a ropeway, a five-star hotel, at Jog Falls in Sagar taluk of Shivamogga district, has not gone down well with environmentalists and local people. The construction activities in the sensitive area would pose a threat to the world famous tourist attraction, environmentalists worry. The local people stress the need for addressing the basic needs of tourists visiting the place.

The place, where river Sharavati takes a plunge from a height of 810 ft, attracts nearly 10 lakh tourists in the rainy season. The Cabinet, which met on Thursday, cleared the project worth ₹116 crore, which includes the construction of a star hotel, coffee bars, ropeway, and other facilities on Design-Build-Finance-Operate-Transfer (DBFOT) mode. Shivamogga Lok Sabha member B. Y. Raghavendra and Sagar MLA Hartal Halappa have thanked the Government for the decision.

Mr. Halappa, speaking to presspersons, said the ₹ 116 crore approved by the Cabinet was in addition to ₹185 crore for which work had already begun. “A total of ₹301 crore would be spent on the development of Jog Falls. We will have a cable car, which is found in major tourist places. It will connect the two edges of the site, attracting thousands of tourists,” he said. The MLA maintained that the works were not mere announcements, but would be completed within a time frame, clearing all hurdles.

However, many people are opposed to the ropeway citing that it might affect the valley. It would involve the construction of pillars. “The carrying capacity of the place is already exhausted. Let the Government not bring in new projects to harm the place”, opined Akhilesh Chipli, an environmentalist. The rocks in the valley had been a place for several species of birds. Any activity to promote tourism would harm the biodiversity of the place, he said.

He also opposed the construction of star hotels on the premises. “Why cannot the Government take up construction of hotels at Talaguppa, a nearby place? It is not far away from the tourist spot. I would be happy if the place is maintained as it is instead of taking up any new constructions,” he remarked. Environmentalists are also of the view that the tourist spot is part of an eco-sensitive zone and the Government should not take up works without prior approval of the Forest Department.

The works planned at the site are hardly helpful for a majority of the tourists visiting the place, according to local people.

S. N. Rajkumar, a member of the local forest rights’ committee, said, “A majority of tourists who visit the place are from North Karnataka districts. Those who come from Bengaluru do not stay here. They take a break here on the way to Goa. Then, who will stay at the proposed five-star hotel?”

He also alleged that the government already spent a huge sum on a zip line at the site and it remained non-functional. “It is a waste of money. Now, some more crores are being spent”, he said.

When The Hindu contacted Shivamogga Deputy Commissioner K. B. Shivakumar, who is also chairman of Jog Development Authority, he refused to comment citing that he would not pass his remarks on the Cabinet’s decision.