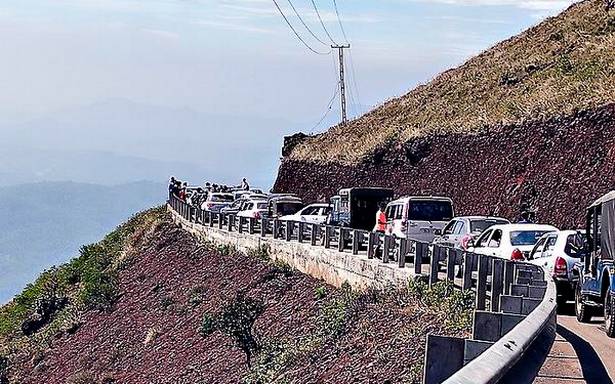 Environmentalists of Chikkamagaluru have criticized the district administration for not taking any measures to control people visiting tourist places of the district in huge numbers, beyond the carrying capacity.

D.V. Girish of Bhadra Wild Conservation Trust, S. Girijashankar, a former member of State Wildlife Board, and Sridev Hulikere of WildCAT-C, in a press release issued here on Monday, said the district administration had remained mute spectator though a large number of people were visiting tourist places. During the Dasara holidays, hundreds visited Chandradrona Hill ranges, Devaramane, Kudremukh, Bhadra wildlife sanctuary and other places. There was a heavy movement of vehicles, causing traffic jams. But no measures were taken to control pollution in the tourist spots.

Many environmentalists and civilians had urged the district administration to impose certain restrictions on the tourists. However, the it did not take any steps. “We are not opposed to tourists visiting. But they should not litter the places. The administration should take measures in the interest of sensitive areas around,” the environmentalists said.

They also pointed out the recent increase in the number of homestays in the district. Many of them were not following rules set by the administration. The municipal waste generated by the homestays had not been treated scientifically. The administration should take action against such homestays, they said.