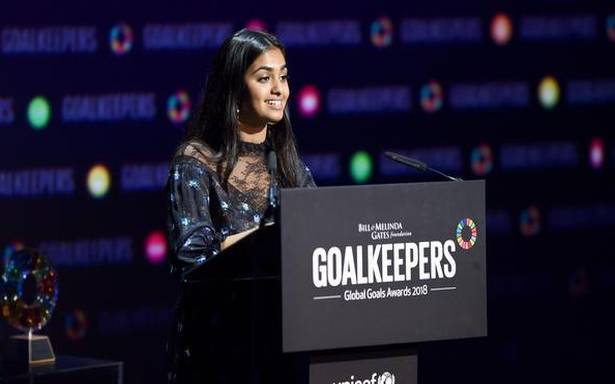 Amika George is the youngest of 1,129 persons named in this year’s Queen’s Birthday Honour List for her campaign to ensure free menstrual products for students

On Saturday, 21-year-old Amika George was honoured as a Member of the Order of the British Empire (MBE) for services to education.

As her extended family spread across Kumplampoika, Kozencherry and Thiruvananthapuram in Kerala, celebrated the news, she told The Hindu that the honour is a brilliant indication that young people are being taken seriously as players with real power to enact change when they see injustices.

Ms George, who crusades for free hygiene products for girls living in poverty with no access to menstrual products, is from Edgware in North-West London, and is currently pursuing the study of Indian colonial history at Cambridge University.

At 17, she read a newspaper article about young school and college girls in the UK missing up to a week’s classes every month because they could not afford to buy sanitary products. “It seemed unfair that a natural biological process was responsible for girls falling behind. To imagine being absent from school hit me,” she said in an e-mail interview.

The thought that these girls were no different from her except for their financial circumstances made Ms George start a ‘Free Periods’ petition in April 2017, seeking government intervention. It met with an unexpected response. She was flooded with emails from girls from Asian communities and other ethnic backgrounds, who told her their families struggled to afford two square meals and they knew there wasn’t money for sanitary napkins. In particular she remembers one girl who wrote that every month, she searched her parents’ wallets or behind boxes and sofa for coins to buy pads and felt embarrassed asking for help or talking about periods to her friends.

“The taboo was still deeply entrenched and I felt angry that girls were being overlooked. It fuelled my determination to take the campaign to a meaningful completion,” she said.

When her petition attracted 1,80,000 signatures, Ms George was inspired to lead a protest outside the British Prime Minister’s residence on Downing Street on December 20, 2017. She kept demanding change through media interviews and school visits, even though nothing tangible happened. She then launched a not-for-profit organisation, Free Periods, in January 2019, and worked with human rights lawyers to persuade the UK government to pay for the menstrual products and ensure every child in England attended school regularly.

Last March, the Chancellor announced special funds for every school and college in England for period products for all students, with monitoring of supplies.

Through the campaign, Ms George made sure her academics were not disrupted.

“Today, no girl in UK has to miss school because they can’t afford sanitary napkins. They attend school with dignity and period no longer holds them back. The supplies are monitored and places such as theatres, sports stadia, cafes and restaurants also provide free pads now and young people can access sanitary protection where and when they need to. That’s success,” she said.

In receiving the MBE, she sees a huge opportunity to raise issues in public consciousness. “Young people, who don’t feel seen, should know there is lot of power in their voice and opinions than they realise,” she added.