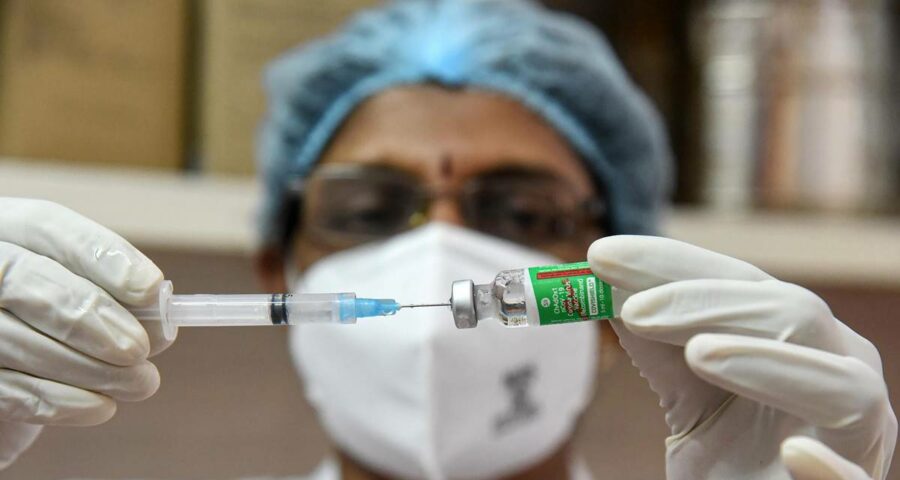 It is time to support India’s demand for a temporary relaxations for IP laws ensure free and equitable vaccines for all and challenge ‘vaccine nationalism’ by rich countries. On the day that India reported over 3,60,000 new cases, the US issued new guidelines allowing the 30 per cent of its population that is fully vaccinated against COVID-19 to go without masks in various settings. Rapid deployment of vaccines is critical to reduce COVID-19 severity, save lives, reduce the pressure on the healthcare system, accelerate the re-opening of society and ensure a quicker return to normalcy. Vaccination is the best and most effective way to end the pandemic in India and across the world.

India has so far fully vaccinated under 2 per cent of its population, including only 37 per cent of its health and frontline workers. Without in any way diminishing the Indian state’s accountability for ensuring vaccination of its own citizens, it is critical to also look at the role of the richer countries and the pharma sector.

Rich countries have largely manufactured for themselves, stocked vaccines they refuse to release and have refused to export supplies of intermediate products and raw materials required to produce vaccines in other countries. Canada has pre-ordered enough vaccines to vaccinate each of its citizens five times over, the UK three times. The US and EU have at least twice as many vaccines per person as they need. While these countries head to normalcy, the rest of the world is still stuck in a COVID nightmare.

The pharma sector has made significant profits at this time of crisis. As the Peoples Vaccine Alliance Asia, has pointed out vaccine manufacturers Pfizer, Johnson & Johnson and AstraZeneca have paid out $26 billion in dividends and stock buybacks to their shareholders in the past 12 months. This would be enough to pay to vaccinate at least 1.3 billion people — the equivalent of the population of Africa.

India has repeatedly asked for an intellectual property waiver of the COVID vaccine in the World Trade Organisation, a move that could allow India’s pharma sector to ramp up manufacturing. India’s proposal states that IP rights such as patents are obstructing affordable COVID-19 medical products. A temporary ban would allow multiple actors to start production sooner, instead of having manufacturing concentrated in the hands of a small number of patent holders. Opponents point towards non-exclusive licenses and technology transfer as alternatives, along the lines of the agreements that AstraZeneca and Novavax have established with the Serum Institute of India for vaccines. However, India’s experience suggests reliance on one or two manufactures who are also able to set the price of the vaccine have clear limitations. Accordingly, relaxation of intellectual properly would be timely and critical.

This has been rejected by wealthier countries including the European Union, the United Kingdom, US and Switzerland; coincidentally also home to major pharmaceutical companies. More recently, justification for this was provided by philanthro-capitalists like Bill Gates who rejected the move to ease access to life saving vaccines.

Gates, who appears to owe much of his own fortune to IP laws with respect to copyrights and patents associated with Windows and Microsoft, has been an active actor in the pandemic. When Oxford University first announced that it was working on a COVID vaccine, it pledged “to offer non-exclusive, royalty-free licences to support free of charge, at-cost or cost plus limited margin supply.” He convinced Oxford University to renege on its original promise of a no-patent vaccine and partner with the profit-driven AstraZeneca instead. Domestically, SII spoke about the need to pay royalty to AstraZeneca as one of the reasons for hiking vaccine prices domestically.

It is time to support the Government of India’s demand for a temporary relaxations for IP, patents and other such provisions under the Trade-Related Aspects of Intellectual Property Rights (TRIPS) Agreement of the WTO to ensure free and equitable vaccines for all. It is also time to address vaccine nationalism by rich countries, including lifting bans on exports of ingredients for vaccine manufacturing and also push for redistribution of excess vaccine stocks anticipated to not be used in the global north.

Doing so is not just morally imperative, but time-critical. A recent survey by Oxfam International shows that two-thirds of epidemiologists think that we had a year or less before the virus mutates to the extent that the majority of first-generation vaccines are rendered ineffective and new or modified vaccines are required. The world needs urgent action to address the emerging vaccine apartheid. COVID-19 is a global crisis and therefore the vaccination needs to be globally coordinated effort.

(Taneja leads the work on education, health and inequality at Oxfam India. She is one of the founder members of the RTE Forum, India’s largest education network, and coordinates the Fight Inequality Alliance in India)