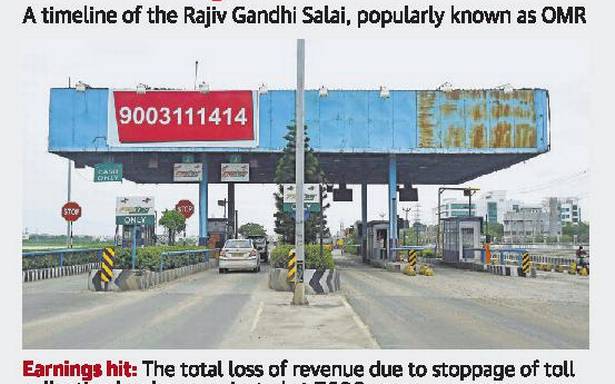 While the removal of toll plazas may come as a relief to thousands of commuters residing around and travelling on Rajiv Gandhi Salai, popularly known as OMR, they may have to brace themselves for traffic congestion for years as Chennai Metro Rail work is expected to commence soon.

After Larsen and Toubro was awarded the contract to build the stretch from Kellys to Taramani, initial work, such as placing of barricades, has begun in some locations. Beyond Taramani, the stretch runs further and ends at Siruseri SIPCOT. The stretch has been divided into two sections for the convenience of construction — Taramani to Sholinganallur and Sholinganallur to Siruseri.

“We have already called for tenders, and three bidders have been shortlisted for the stretch from Taramani to Sholinganallur, and the work will be awarded in a few weeks after the financial bid opens,” an official said.

When full-fledged construction starts, commuters will have a tough time travelling through the limited road space. The construction is likely to be finished in 5-6 years.

South Chennai MP Thamizhachi Thangapandian distributed sweets to commuters on Sunday to celebrate the end of toll collection. However, the impending Metro Rail work and the resultant traffic congestion and the continuance of fee collection at Navalur remain a bitter pill for many residents.

Sources said CMRL will draw up a traffic plan that will cause minimal disturbance to residents.

“We know how they function. The chaos in north Chennai was epic. From their past record, we see that they don’t bother about road-users and only aim at finishing their work,” said Mani Krishnamurthi, a long-time resident of Thoraipakkam. “We have witnessed the widening of the road in the late 1990s, the construction of the MRTS train after that and then the six-laning of OMR. And we have passed through immense traffic jams. We have no other go but to brace ourselves for more traffic jams,” he added.

Vaitheeswaran, a resident of Navalur, said that without creating link roads to ECR and Velachery-Tambaram Road, motorists on OMR will suffer badly. “One road at Thoraipakkam is being stopped at the Buckingham Canal, which will be of no use to residents who want to avoid traffic snarls,” he said.

The total loss of revenue due to the stoppage of toll collection has been projected at ₹600 crore since the collection was for a period of 31 years from 2008.

The six-lane main carriageway was opened to the public on October 29, 2008, and toll operation started on December 15, 2008.

“This loss is to the government since according to the agreement, the company running the road cannot take any profit and would have to plough it back into the road. It is a decision taken by the government, which it would have to bear,” said a retired official of the Highways Department. Passes for residents living along OMR are likely to be discontinued and only those belonging to people near Navalur and Siruseri are to remain effective. The lanes at the Navalur plaza will be increased using the existing space.