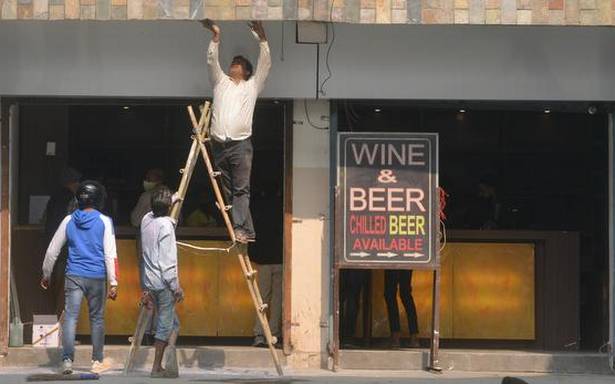 A day after 849 new private liquor vends were supposed to open in the city as per the new excise policy, the majority of these shops were found with empty shelves, very little stock, or still under construction.

The Delhi Government did not give any clarity until Wednesday on how many of the 849 vends were open with enough stock, were functional or the time by when they would begin operating.

Employees of liquor vends and a representative of a liquor company doing rounds of the vends on Thursday told The Hindu that most shops were still under construction or did not have enough stock.

The liquor company representative said, "I went to seven shops in CP, South Patel Nagar, and other places. No shop was ready and all of them were under construction. In the entire city, only 25-30 shops are open now, that too with limited stock."

"We have not completed the work yet. It will take at least 10-15 more days to be functional," a worker at a liquor vend in South Extension said.

The in-charge of a liquor vend in INA said they might be operational only by Monday.

The manager of a liquor vend in Dwarka Sector 12 said that they had very little stock and even ran out of the beer they had on Wednesday.

"We are in the last phase of work. After the work, we will get the licence. We will be operational in the next couple of days," an employee of a liquor vend in Patparganj said. They are also yet to receive the stock.

As per Delhi Excise Policy 2021-22, announced in March by Deputy Chief Minister Manish Sisodia, all of the around 600 Government-run liquor vends were supposed to shut down and exit the liquor business on Tuesday. Only private players have been allowed to sell liquor from November 17.

Till Tuesday, a provisional licence was given to only 350 of the 849 vends, as per the Government.

Despite multiple attempts, a Delhi Government spokesperson did not respond to queries.