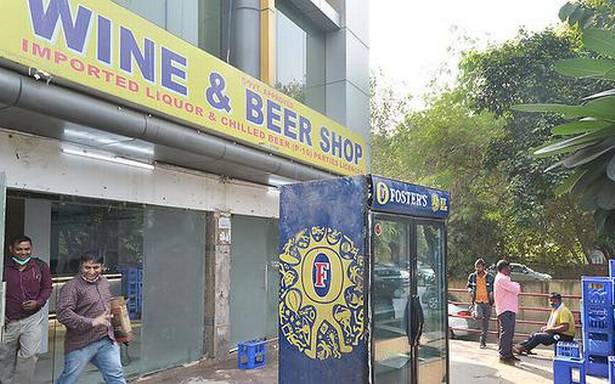 Majority of the 849 new outlets are under construction, some are low on stock

On a day when 849 new private liquor vends were supposed to open in the city, a majority of these shops had empty shelves, very low stock, or were under construction, leaving customers high and dry.

The Delhi Government had announced that all the 600-odd Government-run liquor vends will shut and exit the liquor business on Tuesday and the sale of liquor will be done completely by private players from Wednesday, as per the Delhi Excise Policy 2021-22. This was announced earlier this year by Deputy Chief Minister Manish Sisodia.

On Wednesday, the Delhi Government did not give any clarity on how many of the 849 vends are functional with enough stock or when all of them will be fully functional. Till Tuesday, provisional licence was given to only 350 of the 849 vends, as per the Government.

Representatives of liquor companies, who were doing rounds of the vends on Wednesday, said that most shops do not have enough supply.

Around 1 p.m., at a newly-opened liquor vend in Dwarka Sector 12, almost all the shelves were empty, except for a few beer bottles. “We have nothing other than beer. We are facing issues in getting stock. Our owner has about 10 shops and the situation is same in all of them. Two of them are still under construction. It will take at least a couple of days for things to be normal,” the in-charge of the vend said.

A representative of a liquor company, who was at the store, said, “I had been to another shop before coming here and the situation is the same.”

Sachin Mehra, 45, who was leaving the vend with a bottle of beer said that he had come to buy whiskey. “I stay in Mohan Garden, about 5 km from here, and the vend over there did not even have beer. Even here, there is hardly any stock and they don’t know when it will come.”

Around 2.30 p.m. at INA, another store was still under construction and the manager said they have yet to get the provisional licence. “We got very less time to get the shop ready. After the shop is ready, we have to send a video to the Excise Department and only then will we get the temporary licence,” said Pawan, who is the shop’s manager.

The representative of another brand, who was at this vend, said, “I have been to 8-10 shops. At many shops, work is still on and no one has full stock. We all are losing out on money.”

At another vend in Patparganj, construction was still on. At a store in Mayur Vihar, there was hardly any stock.

The new vends promise to change the experience of buying alcohol in the Capital, as they will be bigger, air-conditioned with glass doors and customers will have a walk-in experience. Out of the 849 vends, 844 will be vends operating in markets, malls, commercial areas, local shopping complexes etc. and will have licence under L-7V. But five of them will be super premium vends, which will be at least 2,500 sq. feet. and will operate under the licence of L-75P1.

The super premium vends will be allowed to sell products only above ₹200 in case of beer and above ₹1,000 for all other spirits. But the tender for the five SPVs was not floated along with the other vends and they will not open from Wednesday.

Apart from the change to the retail vends, under the policy, the Government divided the city into 32 zones and allotted 849 vends for equal distribution.