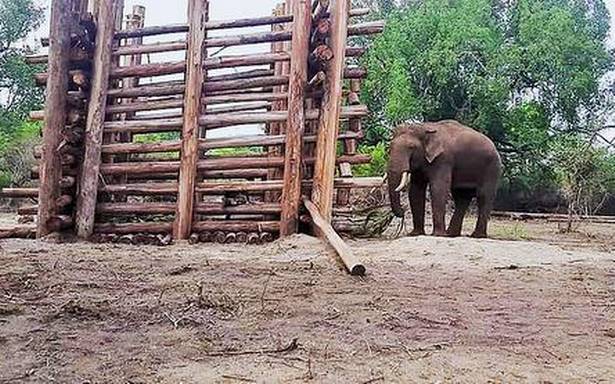 The elephant had been captured and placed in a kraal, ostensibly to treat it for injuries; based on an expert committee’s report, the elephant is set to be released

After more than two months in captivity, wild elephant, Rivaldo, will be released into the wild by the Forest Department.

The animal, had become habituated to humans in the Vazhaithottam area of the buffer zone of the Mudumalai Tiger Reserve (MTR), who had been feeding it for the last few years. It was captured and put inside a ‘kraal’ (elephant shelter), ostensibly to treat it for injuries that the Forest Department said had led to it being unable to feed inside the forests.

Following the animal’s capture, BJP MP and animal rights activist, Maneka Gandhi, wrote to Chief Minister, M.K. Stalin, calling for the elephant’s release. Other conservationists too had come out in support of releasing the iconic tusker back into the wild.

An expert committee was formed to look into whether the animal could be rehabilitated back into the wild. The committee included senior wildlife veterinarians, conservationists and wildlife biologists.

On Friday, Deputy Director of MTR (Buffer Zone), L.C.S. Srikanth, confirmed that an order had been received from the office of the Chief Wildlife Warden authorizing Rivaldo’s release based on the expert committee’s report.

A list of Standard Operating Procedures (SOPs), have also been specified by the Chief Wildlife Warden to safely effect the animal’s release. “The gist of the SOP is that we have to shift Rivaldo from the kraal using a customised vehicle to a specific location, where he will be kept inside an enclosure. This phase will be a soft release, where the elephant is gradually reintroduced back into the wild,” said Mr. Srikanth.

Forest Department officials said that a location to set up the enclosure would have to be found. A meeting will be held with the Chief Wildlife Warden and the Principal Secretary of Environment and Forests to the Government of Tamil Nadu, before the initiative to release the animal is undertaken.

Rivaldo is also set to be radio-collared prior to his release back into the wild.