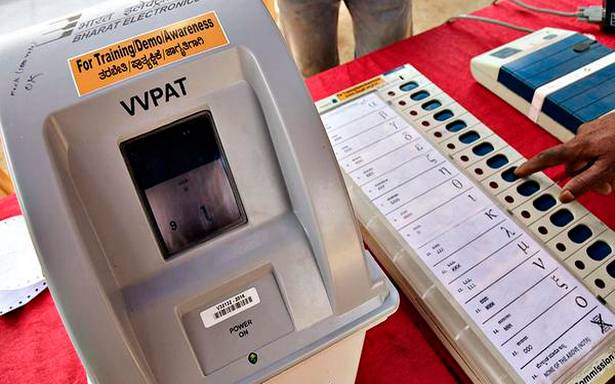 It moved the Supreme Court on machines ‘stuck’ in States/UT which went to polls in 2021.

The Election Commission may continue to be in a bind regarding the availability of Electronic Voting Machines (EVMs) for use in crucial Assembly elections including in Uttar Pradesh in early 2022 though the Supreme Court has lifted its relaxation of the period of limitation for legal proceedings in courts due to the pandemic.

The EC, represented by senior advocate Vikas Singh, had urgently moved the Supreme Court on September 1 about EVMs ‘stuck’ in Delhi and five other States/Union Territory which had gone to the polls in 2021. Mr. Singh had said in an oral mention before the court the poll body needed to quickly move these EVMs to States bound for polls next year.

The EC had pointed to a Supreme Court order of April 27, which open-endedly extended the “period of limitation” or the deadline for moving court due to the pandemic, as the problem. The court’s relaxation of the limitation period in April had stretched to a large chunk of court proceedings, including filing of suits, appeals and petitions. This included election petitions.

The EC had urged the apex court to intervene and fix a timeline for filing petitions in Delhi, which had gone to the polls in 2020, and Assam, Kerala, Tamil Nadu and West Bengal (2021).

On September 23, a three-judge Bench of Chief Justice of N.V. Ramana, L. Nageswara Rao and Surya Kant directed that limitation period would be back in play from October 3.

The court specified that the period between March 15, 2020 and October 2, 2021 would not be considered while computing the limitation period across statutes. “Consequently, the balance period of limitation remaining as on March 15, 2021, if any, shall become available with effect from October 3, 2021,” the court ordered.

However, Mr. Singh told The Hindu that the ECI may still have a problem with the second direction in the court order extending the limitation period up to 90 days, starting from October 3, in cases in which the limitation time had expired between March 15 last year and October 2, 2021.

“The Representation of the People Act of 1951 gives a 45-day window from the date of declaration of election results for a candidate or elector to move the High Court concerned… Here, the court order gives 90 days from October 3. Ninety days means an aggrieved person has time till January 3… The Election Commission will need at least six months to get the EVMs ready for the election in 2022,” Mr. Singh said.

“It is trite to mention that the Election Commission of India releases for reuse only those EVMs which have been used in constituencies in respect of which no election petition/writ petition has been filed raising any EVM-related issue,” the ECI had said in its application before the apex court.

The EC had said there were back-to-back Assembly elections lined up in Goa, Manipur, Uttarakhand, Punjab in March 2022. The election in Uttar Pradesh is on May 14, 2022.

The extension of the limitation period by the apex court on April 27 had frozen the deployment of 4.48 lakh ballot units, 3.73 lakh control units and 3.95 lakh VVPATs in Assam, Kerala, Delhi, Puducherry, Tamil Nadu and West Bengal.

If the EVMs continue to remain stuck in Delhi and the five States/UT, then machines have to be transported from other States, leading to “serious logistical challenges which may delay the first-level checking of ECMs and VVPATs”, the poll body had noted.

The preparatory work for the 2022 elections, like shifting EVMs and VVPATs, ought to have started in July 2021. The first-level checking, a mandatory process, has to start in the first week of September this year, it had said.