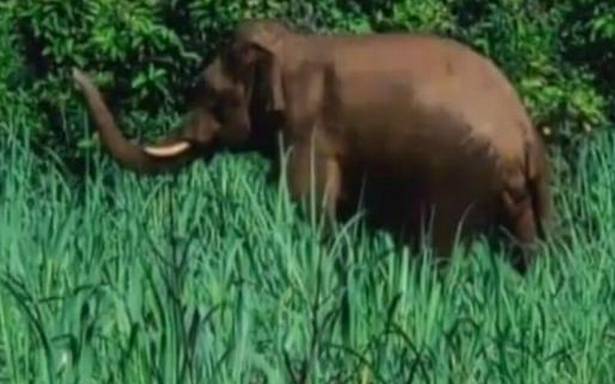 Staff deployed to monitor its movement

An elderly man was killed and a woman was critically injured when a wild elephant attacked them at Bommavaripalle village of G.D. Nellore mandal, 15 km from here, on Wednesday.

Divisional Forest Officer (Chittoor Wildlife East) G.G. Narentheran said that two elephants were on the move towards the west division after leaving the Nagari plains of Karveti Nagaram and Puttur ranges. In this process, the two got separated. While one elephant crossed into the forests near Kanipakam and entered the West division, another was still lingering on the outskirts of Chittoor.

An elderly man, Vajravelu (65) was trampled by the elephant, which later attacked a woman farmer (55) a few meters away, before moving closer to the Bengaluru-Tirupati national highway.

Both the injured were rushed to General Hospital at Chittoor. Vajravelu, who suffered multiple fractures, was rushed to SVRR Hospital at Tirupati, where he succumbed to injuries. The woman’s condition at Chittoor hospital was said to be stable.

The DFO said that the lone elephant, which attacked the two, was a member of the three-member “bachelor’s group”, which entered Chittoor district from Tamil Nadu forests in early January.

While one elephant was electrocuted near Puttur a couple of days ago, the second one crossed into the west division on Tuesday night. The present one on prowl near Chittoor would be driven into the forests, he said.

The bachelor’s group had earlier killed a night watchman at a mango orchard near Puttur on May 9, besides injuring four villagers in the Nagari plains in separate incidents.

“Due to the presence of the lone elephant, we have arranged tom-tom in the villages on its possible path towards forests, asking people not to venture out at nights, and also to move in groups. We have deployed our field staff to monitor its movement and prevent it from moving into human habitations,” Mr Narentheran said.