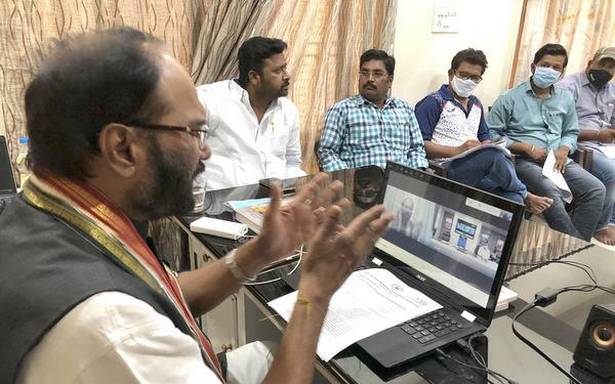 Telangana Pradesh Congress Committee (TPCC) president and Nalgonda MP N. Uttam Kumar Reddy has appealed to the Election Commission of India (ECI) to deploy Central forces in Nagarjunasagar bypoll as the “local police was hand-in-glove with the ruling party and turning a blind eye to rampant distribution of money and liquor to influence voters”.

“The Chief Electoral Officer (CEO) of Telangana, district officials and the Returning Officer too, are silent and not taking action despite the submission of evidence on money and liquor distribution and intimidation of voters by the Telangana Rashtra Samiti (TRS),” Mr. Reddy alleged.

He made the allegations in a video conference with Election Commissioner Rajiv Kumar on Tuesday. Mr. Reddy sought the immediate intervention of the ECI or else there would be no meaning of democracy. Mr. Reddy said there were more outsiders in the constituency than the actual voters as the TRS has deployed all its workers, including ministers, MLAs, MLCs, sarpanches in all 189 gram panchayats, two municipalities and tribal hamlets of Nagarjunasagar Assembly constituency.

“The ECI should immediately ask the outsiders to leave the constituency as they were distributing money and liquor and also intimidating voters that their benefits would be stopped if they don’t vote for the TRS. The borders should be sealed and Central forces should be deployed to check all vehicles meant for money and liquor distribution,” he said.

The TPCC chief also sent a representation to the ECI to implement COVID guidelines and said that there was a danger of the virus spreading from thousands of people being mobilised for Chief Minister K. Chandrasekhar Rao’s public meeting in Halia on April 14.

He wondered as to how the ECI could put lives at risk with huge spike in COVID cases in Telangana, shortage of hospital beds and vaccines. The Health Minister has admitted these facts but the Chief Minister himself is addressing a public meeting gathering thousands of people at one place. COVID guidelines must strictly be followed at the meeting, he added.

The Congress MP also informed the Election Commissioner that during the recent MLC elections, TRS openly distributed ₹1,000 to ₹2,000 per vote and liquor even on polling day. The Telangana CEO and other officials remained silent then as well.