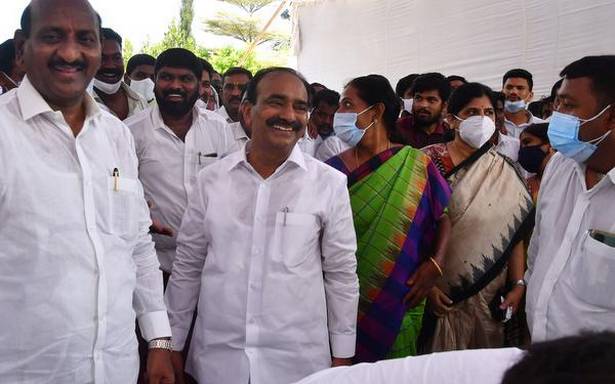 Elections on Oct 30 and Results on Nov 2

The much-awaited by-poll for the Huzurabad assembly constituency will be held on October 30 and the results would be announced on November 2.

The Election Commission of India issued the notification on Tuesday for bypolls to several Assembly and Parliament constituencies across the country including Huzurabad.

The bypoll was necessitated with the resignation of former Health Minister, Eatala Rajender from the Assembly after he was dismissed by the Chief Minister K Chandrasekhar Rao from his Cabinet on charges of ‘land grabbing’. He later joined the Bharatiya Janata Party (BJP) and is likely to be its candidate.

The ruling TRS has announced the name of its student’s wing president Gellu Srinivas Yadav as its candidate while the Congress is yet to finalise its nominee. The Bahujan Samaj Party (BSP) and the Left parties are also likely to field their candidates.

The elections have already raked up enough heat with accusations and counter-accusations by both the BJP and the Telangana Rashtra Samiti (TRS). The contest, however, is being seen between Mr. Rajender and Mr. Chandrashekhar Rao as it is believed that personal differences between them has actually led to the bypoll.

The government has been on an offensive both politically and administratively to ensure Mr. Rajender’s defeat at any cost. The announcement of Dalit Bandhu scheme where every Scheduled Caste family will be provided a grant of ₹10 lakh by the government is being seen in this backdrop. Since Huzurabad has been chosen as the pilot for the project, it is evident that the government wants to gain maximum mileage out of it is the criticism from the opposition.

The campaign has reached the crescendo much before the dates were announced with Mr. Rajender visiting every village in the constituency seeking their support and evoking the sentiment that he was targeted for raising questions that irked the Chief Minister and his style of functioning.

To counter the high voltage campaign the TRS has brought in its ever-dependable Finance Minister T. Harish Rao to ensure that the ruling party has smooth sailing. He has been camping in the area holding series of meetings with caste groups and working on defections from the BJP to the TRS. He has succeeded in attracting several followers of Mr. Rajender to the TRS fold so far.

However, Mr Rajender, a four-time MLA and who has served as a Minister in Mr. Rao’s two terms, and also in the Y.S. Rajashekhar Reddy cabinet in the combined Andhra Pradesh is giving some tense moments to the ruling party evoking sympathy among the voters with whom he shares a personal rapport.

Mr Rajender has been trying to convince the voters that he was made a sacrificial goat as he did not compromise with his self-esteem and questioned the CM on certain government decisions. He claims that he was seen as an obstacle to the elevation of KCR’s son and IT Minister, KT Rama Rao to the top post in the near future.