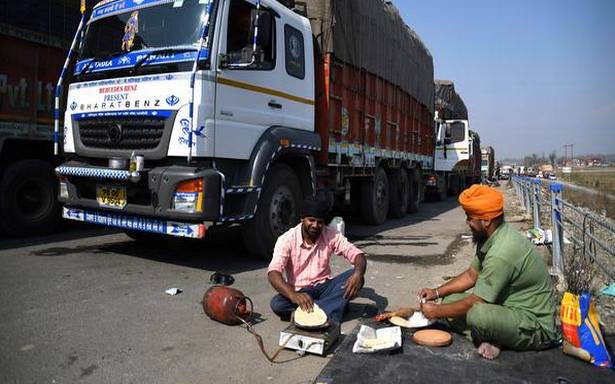 40 lakh trucks to remain off road on February 26 also in protest against fuel price hike.

The All India Transporters’ Welfare Association (AITWA) has demanded abolition of the new E-Way Bill or scrapping of certain rules and has, in support of its demand, decided to support the Bharat Bandh call given by The Confederation of All India Traders (CAIT) on February 26 against the GST.

“All State-level transport associations have confirmed their support to the AITWA also in protest against the fuel price hike,” said Mahendra Arya, AITWA national president.

“We will reject booking and movement of all Bill-oriented goods for one day. All companies have been asked to park their vehicles between 6 a.m. to 8 p.m. as a symbolic protest. Godowns will display protest banners. Customers will be requested not to book or load goods on the day.”

Penalties for a truck carrying a consignment with an expired or an erroneous Bill amount to 200% of the tax value or 100% of the invoice value under Section 129 of the CGST Act, 2017.

“For small and medium transporters, especially those involved in part-load movement of goods or retail transportation, the new rule means a burden with penalties running into lakhs of rupees for circumstantial delays. This may lead to completely shutting their shop,” Mr. Arya said.

The AITWA has been writing letters to the government on various issues mainly on the impracticable E-way Bill under the GST and the unviable pricing policy of diesel, Mr. Arya said.

“The AITWA demands abolition of the Bill as the E-invoice is good enough for preventing tax evasion. Vehicles may be tracked by the government using FasTag connectivity to E-invoice. Transporters should not be subject to any penalty for any time-based compliance target of transit.”

He said diesel prices should be reduced and mechanisms need to be discussed and created with the industry for regulation.

“Diesel prices should be equalised across the nation.”