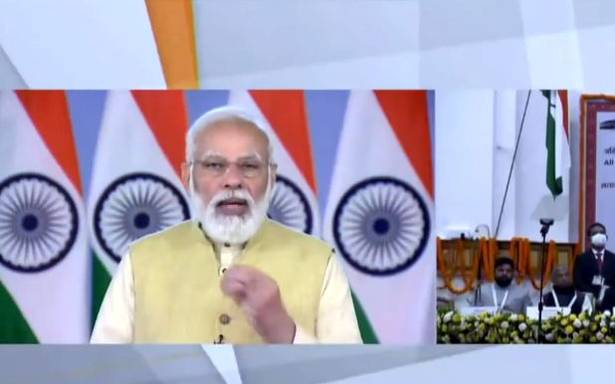 PM urges them to conduct themselves as per ‘Indian values’.

Prime Minister Narendra Modi on Wednesday said elected representatives should have one mantra for the next 25 years — “duty, duty, duty” — and conduct themselves as per “Indian values”, while virtually addressing the 82nd All-India Presiding Officers’ Conference (AIPOC) held at the Himachal Pradesh Assembly here.

Mr. Modi told the conference in its centennial year that the next 25 years were very important as India completes 100 years of Independence in 2047. In this time, he said we “can fulfil the mantra — duty, duty, duty”. He said democracy was not just a system for India, but an intrinsic part of its nature and life. He said the traditions of Indian legislatures should be “inherently Indian”.

Lok Sabha Speaker Om Birla said there was a need for reviewing the functioning of legislatures as the AIPOC marks 100 years since its first conference. The two-day conference was being attended by presiding officers from 26 States, an official said, adding that West Bengal and Chhattisgarh presiding officers were not present. The topics “Journey of a Century — Evaluation and the way forward” and “Responsibility of Presiding Officers towards the Constitution, the House and the People” were up for discussion, while a report on the anti-defection law would be placed before the conference on Thursday, Mr. Birla said.

One nation, one legislative portal

Mr. Modi also called for “one nation, one legislative portal”. He called for a portal to be created for all legislatures to give them a technological boost and allow them to be connected with one another.

Mr. Modi also said the first-time elected representatives should receive training on the right way to behave in the House. He said the youth, women and members representing aspirational districts should be given more time to speak. He said a few days a year should be set aside to discuss the experiences of those members who are doing something for society and time should be allocated for “quality debate”.

Mr. Birla said the decreasing number of meetings of legislatures and the declining discussion while making laws was a matter of concern. He said as India celebrates Azadi ka Amrit Mahotsav, “there should be a collective resolve to prepare a model document to ensure that when 100 years of our Independence are completed, there should be uniformity in the rules and procedures of all legislatures and the working of the legislative bodies should be according to the hopes and aspirations of the people”.

Addressing the Speakers and the Deputy Speakers, Rajya Sabha Deputy Chairman Harivansh said it was time for legislatures to adopt new technologies and be prepared for the future with Artificial Intelligence. He said States were yet to repeal redundant laws at the same speed as the Centre, where about 1,500 such laws had been repealed from 2014 to 2019.

Himachal Chief Minister Jai Ram Thakur spoke of the State’s progress in COVID-19 vaccinations, with 75% of the eligible population having received both doses.

Himachal Pradesh Assembly Speaker Vipin Singh Parmar said Shimla had hosted the conference seven times, including the first one in 1921. Historic resolutions like the one in support of giving women the right to vote in 1925 were passed in the conference, he said.

Leader of the Opposition Mukesh Agnihotri said there was a time when Speakers did not attend political events, but the tradition was in decline now.