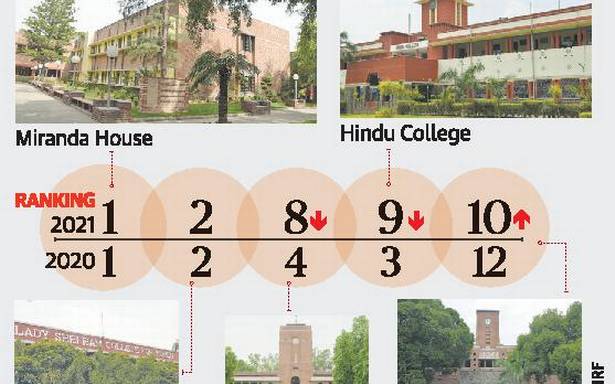 Five out of the top 10 colleges under the National Institutional Ranking Framework (NIRF) ranking announced by the Union Education Ministry are Delhi University colleges, with Miranda House topping the list yet again.

For Miranda House, this is the fifth consecutive year when it has been ranked first, with the college receiving its first rank position in 2017.

Both ARSD college and Sri Venkateswara College have improved its rankings this year as opposed to last year’s 13th and 14th position respectively.

DU Vice-Chancellor P.C. Joshi congratulated the colleges for making it to the top 10 in the country.

Mr. Joshi told The Hindu: “First of all DU has done very well in the NIRF rankings across categories including research. The only setback we had was a poor student-teacher ratio. This is because recruitment had not happened for a very long time. But now we have addressed that issue. The colleges have done exceedingly well. We are very happy with the performance of the university as a whole.”