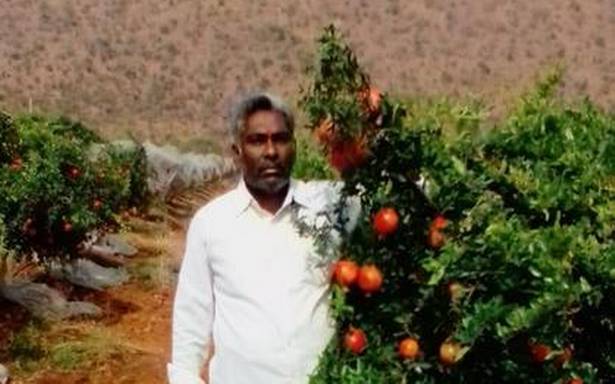 Water scarcity is a thing of past for me now even during the peak summer, says K. Venkata Reddy

Rain-fed agriculture has always been a gamble, given the erratic monsoon and it is more so in the drought-hit Prakasam district.

Like his fellow farmers, K.Venkata Reddy was about to uproot the fruit-bearing trees in his farm at Tippayapalem, near Markapur, after his borewell dried up in 2017 after successive years of drought.

Fortunes turned for the better for the progressive farmer as his crucial decision to dig a farm pond with a holding capacity of 3 crore litre paid rich dividends. He also installed drip irrigation system to ensure efficient use of water in his orchard.

Convinced about the benefits of farm pond, he dug another farm pond of the same capacity. “Now, water scarcity is a thing of the past for me even during the peak summer,” says Mr. Venkata Reddy.

“Marketing of fruits including jamun, pomegranate, sweet lime and custard apple was not a problem even during the coronavirus pandemic as the upcountry traders kept thronging my farm, offering a premium price,” says the 57-year-old farmer, adding that he has struck a deal with a trader from Kolkata for a truck load of sweet lime.

Mr. Venkata Reddy says he used to send his produce to Chennai, Bengaluru, Hyderabad earlier. Now that I have taken to organic farm practices, traders from far and near approaching me. I am using fertigation with a network of pipes,” he says.

The farmer also practises pisciculture in his farm pond. The fish prevent clogging of the pipes used in the drip irrigation system, he says, adding that he has adopted mulching technique and ZEBA, a starch-based super absorbent, for more efficient crop production. “I am happy now,” he says while explaining the best farm practices.

Each farmer should set aside 10 cents of land per one acre of land for creating a farm pond as it ensures irrigation water to crops during water scarcity, says the farmer.

“Selection of drought-resistant varieties is important. I am using ‘Jeevamurtham’ comprising cow dung, cow urine, jaggery and gram flour which is being applied with water through the drip irrigation system in my orchard,” he adds.