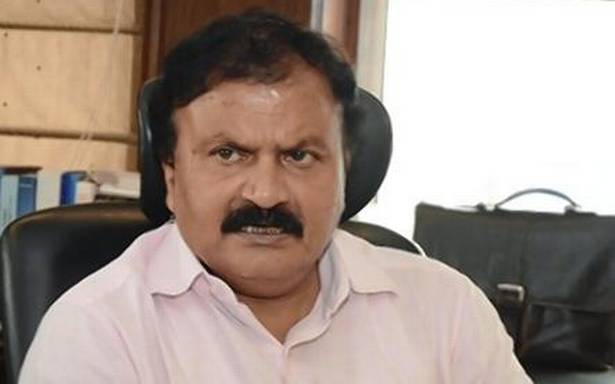 Secretary, Department of Industry and Internal Trade (DPIIT), Guruprasad Mohapatra died of COVID-19-related complications at the All India Institute of Medical Sciences (AIIMS) on Saturday.

Mohapatra, 59, was admitted to AIIMS in mid-April. He is the first serving Secretary to the Government of India to have succumbed to COVID-19.

“Saddened by the demise of Dr. Guruprasad Mohapatra, DPIIT Secretary. I had worked with him extensively in Gujarat and at the Centre. He had a great understanding of administrative issues and was known for his innovative zeal. Condolences to his family and friends. Om Shanti,” Mr. Modi said in a tweet.

Finance Minister Nirmala Sitharaman tweeted: “Shocked to know that Dr. Guru Prasad Mahapatra, Secretary, @DIPPGOI is no more. Enthusiastic at work, positive in attitude as a senior bureaucrat, he was constructive in his approach. Condolences to his family and friends.”

“Dr. Guruprasad Mohapatra, DPIIT Secretary was a very able and hardworking officer. His untimely demise is very saddening. My thoughts and prayers are with his bereaved family in this hour of grief,” Mr. Shah tweeted.

Mr. Goyal said Mohapatra’s long-standing service and dedication to the nation had left a lasting impact.

Mr. Pradhan said India had lost an able administrator to untimely death. “Dr. Mohapatra was also at the forefront of COVID management in the country. Though his karmabhoomi was in Gujarat, Odisha today has lost a true warrior. My deepest condolences to his family,” he added.

Expressing deep shock at the untimely death, Mr. Gauba said that as the head of one of the Empowered Groups, the late Secretary had worked with utmost dedication in the ongoing fight against the COVID-19 pandemic.

“Even after he had tested positive and was not well, he continued to work for long hours, monitoring the supply of oxygen across the country, under very challenging circumstances,” the Cabinet Secretary said.

Wipro Chairman Rishad Premji tweeted, “Saddened and shocked on the passing of Secretary DPIIT Sh. Guruprasad Mohapatra ji. Will remember him as a capable, committed and warm officer. His untimely death is an irreparable loss to the entire fraternity. Condolences to the family & loved ones…”

The Confederation of Indian Industry (CII) too stated that the Secretary was a passionate administrator and his innovative ideas and proactive initiatives had set new models for the Indian economy.

“CII deeply appreciates the contributions he made to manufacturing sectors, FDI, and ease of doing business as Secretary, DPIIT which will continue to positively impact industry,” the chamber said in a statement.

Prior to taking over as Secretary, DPIIT in August 2019, Mohapatra served as Chairman of the Airports Authority of India (AAI).

He was a Gujarat cadre 1986 batch IAS officer. He had earlier served as Joint Secretary in the Department of Commerce.

At the State level, he had held the position of Municipal Commissioner in Surat, Gujarat.