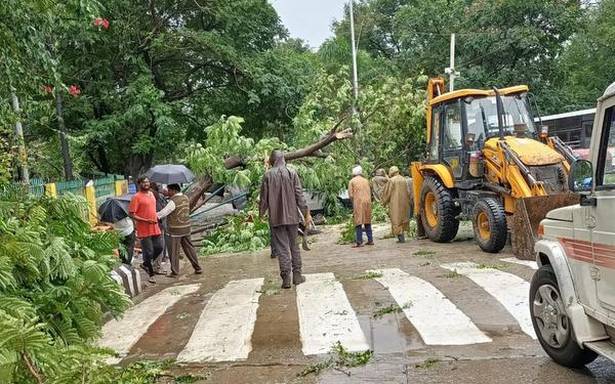 Six times of the average rain in November recorded

Heavy rain lashed several parts of Chittoor district on Thursday, paralysing normal life in about 43 mandals, while all the 66 mandals received rain. The rainfall on Thursday morning was recorded at 2,167.8 mm, which was the highest in November. The district has cumulatively received 8,376 mm of rainfall since November 1, which is six times more than the average rainfall in November.

The impact of depression in the Bay of Bengal was felt mostly in Varadaiahpalem, B.N. Kandriga, Satyavedu, and K.V.B. Puram mandals, with several areas witnessing water-logging. The sarpanches of some of the SC/ST colonies had to deploy earthmovers to divert stagnant water into the fields and open areas.

Heavy rain was reported in Irala, Tavanampalle, Puthalapattu, and Pakala mandals in western Chittoor. The entire eastern belt witnessed downpour since morning, and it continued till late in the evening. Madanapalle division reported heavy rain from the afternoon.

The busy Tada-Srikalahasti road was badly damaged, forcing diversion of vehicular traffic. The rural roads turned into a cesspools in Nagalapuram, Nindra, and Vijayapuram mandals. In Yerravaripalem mandal in Piler division, over 100 village tanks were filled to the brim. Repeated power interruptions were reported in several parts of Satyavedu and Nagari Assembly constituencies.

Irrigation officials on Thursday morning lifted the gates of Araniyar and Kalangi reservoirs at Pichatur and K.V.B. Puram and released a huge quantum of water downstream, and people along the route were warned about the development since Wednesday evening. The officials said that about 15 major tanks suffered small breaches in the district. About 500 families from the water-logged areas of the eastern mandals were shifted to the rehabilitation centres. Two teams of NDRF were deployed to tackle the situation.

Meanwhile, the district administration had announced a holiday to schools and colleges.