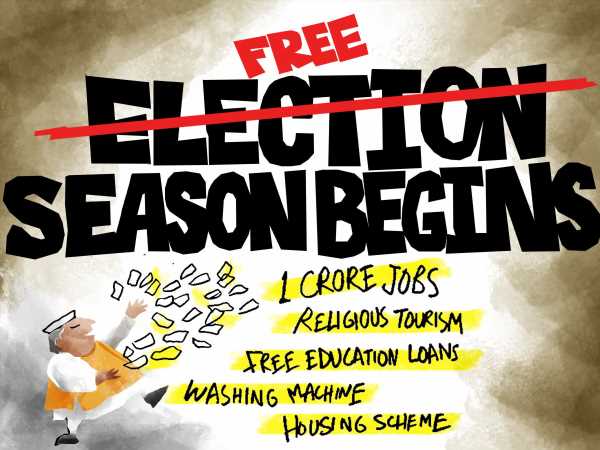 Voters can be relied on to punish a party which makes reckless promises without actually implementing them, asserts Virendra Kapoor.

It is hard to regulate poll promises. This truth might soon dawn on the Supreme Court and the Election Commission of India which are now seized of the matter of freebies.

For, even if politicians tend to promise the moon to the voters holding these promises to the prior test of financial viability can be highly problematic.

There are some things which are best left to the judgment of the voters. Freebies is one of them.

Admittedly, the ECI was reluctant to enter the ongoing debate over freebies. It was constrained to do so by the Supreme Court which while hearing a petition against reckless promises of poll-eve freebies — or ‘revadis’ as the prime minister had called them recently — insisted that the poll body offer its response.

In turn, the ECI wrote to the political parties soliciting views on amending the Model Code Conduct which comes into force upon notification of the poll.

Most Opposition parties reacted angrily against the ECI circular, accusing it of overreach.

It was pointed out that the ECI’s job was to conduct free and fair elections, not to vet party promises for financial viability.

Even though it was known that the ECI had intervened in the on-going debate only at the instance of the Supreme Court, the Opposition parties berated it for exceeding its brief.

The suggestion was that the ECI was intervening to please the prime minister who had earlier spoken of the harmful revadi culture.

Of course, the issue of poll freebies is not new.

Ahead of the 2014 Lok Sabha election, the ECI had sought to make political parties accountable for the promises made in their manifestoes.

At the time all political parties, including the BJP, had protested the proposed intervention by the poll body.

Yet, the only case when the ECI actually censured a party for promising a freebie without furnishing requisite details as to how to fund it was in 2016 when it ticked off the AIADMK.

Notably, the Model Code of Conduct till date lacks statutory backing, it being enforced owing to its wider public acceptability which is further buttressed by the higher judiciary.

Under paragraph VIII of the MCC the ECI had extended the scope of its jurisdiction by making poll promises subject to their financial viability.

However, the poll body has not acted on this provision to demand how parties would fulfill promises of free power, water, free cycles, tens of thousands of new jobs, etc.

In its latest intervention, the ECI on October 4 asked the parties to list the fiscal implications of poll promises.

Without doubt, insisting that the parties explain how and from where the funds will come to implement the promises will help voters to make informed choices.

Also, the parties were asked to detail the extent of coverage of proposed freebies, and the expenditure thereon, and, of course, the source of funds.

Clearly, the proposed changes in the Model Code of Conduct will put the Opposition parties at a disadvantage vis-a-vis the ruling party.

For, a ruling party will have a ready access to the official financial data and will be able to support its promises with the requisite details.

But Opposition parties will be unable to furnish remotely credible details of expenditure and revenue-generation to fund the promises.

It is true that political parties in their desperation to win elections make all manner of reckless promises which while in power they find hard to implement without wrecking the already stretched finances of a state government.

For instance, in the recent election in Punjab, the Aam Aadmi Party promised to give a monthly stipend of Rs 1,000 to every woman eighteen year old or above from the ‘very first month of coming to power.’

Given that Punjab is one of the most debt-ridden states, an additional burden of about Rs 4,000 crores (Rs 40 billion) per annum will further worsen its financial condition.

Small wonder, then, in spite of being in power for eight months, the AAP government is yet to implement a promise which observers believe persuaded women to vote for it in large numbers in the February 2022 poll.

But the question is whether the ECI could have prevented the AAP from making such a promise.

Likewise, the promise of free bijli-paani made by both AAP and the Congress in the election.

The fact that the Punjab State Electricity Board is neck-deep in debt due to free power to farmers and consumers alike, further increasing the number of free units of power to a much wider section of the people would only be a recipe for bankrupting the PSEB.

The question then is: Could the ECI have prevented the parties from making such promises in their election manifestoes? At one level, let us go consider the 1971 Lok Sabha election.

Pollsters believe that Indira Gandhi won a landslide victory on the heady slogan of ‘Garibi Hatao‘.

If she were to adhere to the demands of today’s ECI, Indira Gandhi would have had to furnish in some detail as to how she intended to vanish poverty of nearly two-thirds of the population and more critically where would she get the funds to do so.

In short, such a tantalisingly short but effective slogan would have fallen prey to the intervening zeal of the election body and failed to pass muster.

The fact that Indira Gandhi made not an iota of progress in removing poverty would have in retrospect justified the ECI in disallowing such a misleading poll promise.

Though the average voter is much wiser after decades of democratic competition among various parties, and his commonsensical power to weigh the doable and undoable promises should not be underestimated, the apex court can still consider a via media to guard against parties making reckless promises and thus wrecking the deficit budgets of state and central governments.

Maybe an independent body of financial experts and former bureaucrats and judges can be constituted to vet the poll manifestoes of various parties before these are released for the voters.

Such a body could examine the manifestoes and, if required, question parties to explain how they intended to raise the required funds to implement them.

However, care should be taken not to involve the ECI in vetting poll promises since it would detract from its main task of holding free and fair elections.

In the ultimate analysis, voters themselves can be relied upon to punish a party which makes reckless promises without actually implementing them.

The commonsense of the Indian voter should not be undervalued.

Columnist Virendra Kapoor — former editor of the Free Press Journal and Onlooker magazine was jailed for his views during the Emergency.
You can read his earlier columns here.
Feature Presentation: Aslam Hunani/Rediff.com