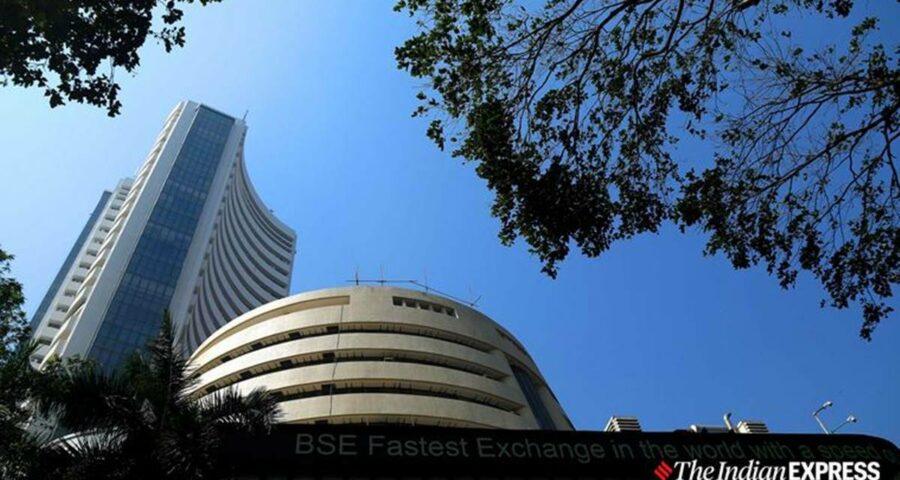 Despite Covid cases and mortality hitting new highs every day, the stock markets have been on a rise with domestic institutions absorbing shares dumped by foreign investors. The benchmark Sensex at the BSE — which gained 790 points, or 1.6 per cent on Wednesday — has risen by 1,855 points, or 3.87 per cent, over the last three trading sessions. The Sensex closed at 49,733 on Wednesday.

While the recent stock market growth has been on the back of good fourth quarter results, waning of anxiety around a nationwide lockdown and hopes of faster vaccination across the country with the government permitting all above the age of 18 for vaccination beginning May 1, there has been a big shift in the participants in the rally. Domestic institutions, led by Life Insurance Corporation of India (LIC), have turned out to be the new bulls in the trading ring, taking over the space vacated by foreign portfolio investors (FPIs), say market participants.

If global liquidity and inflow of funds by FPIs were at the centre of the domestic market rally that took off in October 2020, the current resilience amidst the rising Covid cases is primarily supported by domestic institutional investors (DIIs) — mutual funds and insurance companies among others. In April (till date), DIIs have invested a net of Rs 10,611 crore as against a net outflow of Rs 12,014 core by FPIs. Market data shows that for the first time in seven-months, DIIs have overtaken FPIs in net investment in Indian equities.

While, on Wednesday, both DIIs and FPIs were net positive investors and that lifted the markets, on Tuesday, domestic institutions bought stocks worth Rs 1,463 crore while FPIs sold Rs 1,454 crore. The Sensex rallied 558 points despite the FPI pull-out. DIIs bought stocks worth Rs 1,022 crore on Monday whereas FPIs sold Rs 1,111 crore. “The market would have crashed like the way it plunged in March and April last year had the domestic institutions not supported the market this time. Another market crash would have hit the investor sentiment hard,” said veteran BSE dealer Pawan Dharnidharka.

Between October 2020 and March 2021, FPIs had pumped in a net of Rs 1.97 lakh crore and the investment lifted the Sensex by over 31 per cent from levels of 38,000 to over 50,000 in March. DIIs were laggards in that period and pulled out a net of Rs 1.31 lakh crore between October and February. In March, DIIs had invested a net of Rs 5,204 crore into domestic equities. Among DIIs, Life Insurance Corporation (LIC) — the largest investor in stock markets — invests around Rs 50,000 crore in stocks every year. “The absence of flows this month should also be viewed in the context of the $20 billion inflows in the December quarter which in fact was the all-time highest flow to India in any quarter,” said S Ranganathan, head of research at LKP Securities.

Market participants say that the weak participation by DIIs between October and March was on account of profit booking by domestic investors, who rushed to book profits and redeem some of their investments in mutual funds as the markets hit new highs. “The sustained selling by FPIs in April so far is negative but FPI selling is now more than compensated by DII buying. Market’s resilience during this health crisis is positive and has to be taken seriously,” said V K Vijayakumar, chief investment strategist at Geojit Financial Services.

While FPIs have been concerned over the sharp rise in Covid cases around the world (especially in India) and are practising caution, market participants say that domestic investments have been strong on factors such as strong fourth quarter results, waning of anxiety around a nationwide lockdown, expansion of vaccination for individuals above 18 years old among others.

Industry insiders say that the majority of workers and employees in factories fall in the age bracket of 18-45 and a quick vaccination of the workers will ensure the continuation of economic activity across the country and also the growth of the economy.

“We were pushing for vaccination of all above the age of 18 with the government as the majority of the workers employed in factories fall in the age of 20-40. Their vaccination will be an additional security for industries to continue their operations, avoid a full-scale lockdown and continue with the economic activity in the country,” said a senior official with a leading industry association.

Markets extended gains for the third consecutive session aided by expectations about the earnings season. Despite caution amongst global peers ahead of the US FOMC meet, the benchmark opened gap-up and continued to surge higher. The earnings outcome of companies in the banking and auto space led the rally as it further boosted the investor confidence. The broader markets too ended in positive in the range of 0.7-0.8 per cent. Barring healthcare, metals and capital goods, all sectoral indices ended in the green.

S Hariharan, head—sales trading, Emkay Global Financial Services, said, “The market sentiment was boosted by a set of strong results and continuing strong momentum in global markets, over-shadowing concerns over economic activity arising from renewed lockdowns and the second wave of covid-19 infections. Market-wide futures rollover has been strong with the median basis holding close to a fair level of 42-43 bps, while roll proportion is strong at 60 per cent.” Metals and banking sectors in particular saw renewed long open interest build-up, while the IT sector lagged in a case of rotation of positioning. The mid-cap out-performance, which is a theme that has been in play for the last six months, continues to play out. Barring any further widespread impact of Covid infections and resultant lockdowns in tier 2 and tier 3 cities, Nifty can be expected to trade towards its life high in May, analysts said.

“Superior Q4 results and vaccine optimism buoyed domestic markets to trade on a positive footing for the third consecutive day ahead of the Fed interest rate decision. Strong buying interest was seen in banking and auto stocks with enhanced business prospects which is likely to be maintained,” said Vinod Nair, head of research at Geojit Financial Services.

On the way ahead, analysts said markets will first react to US Federal Open Market Committee (FOMC) meet outcome in early trade on Thursday and then focus would shift to the monthly derivatives expiry and earnings.