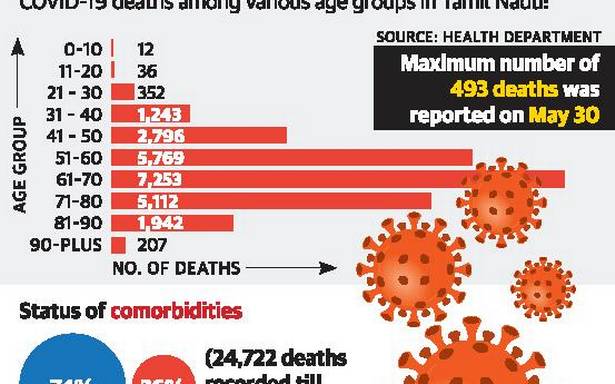 In the second wave of the pandemic, COVID-19 pneumonia with respiratory failure was one of the main causes of death.

As doctors witnessed a steep increase in the number of patients hospitalised in the second wave, they were taken aback by rapid disease progression and pneumonia, including in the young, unlike in the first wave.

The State has been reporting over 400 deaths a day since May 21. So far, 25,665 people have succumbed to the infection, registering a case fatality rate of 1.18%.

According to senior doctors, COVID-19 pneumonia with respiratory failure was one of the main causes of death.

“There is rapid disease progression in some patients. In the first wave, people who came in with mild lung involvement or patches in the lungs recovered with supportive line of treatment. However, even a 30%-40% lung involvement affected a patient badly in this wave,” said E. Theranirajan, Dean of the Rajiv Gandhi Government General Hospital (RGGGH).

The number of people affected was huge in the second wave, said R. Ebenezer, senior consultant and head, critical care services, Apollo Speciality Hospitals, Vanagaram. “So we had many sick patients coming in a short span of time. There was rapid transmission and people were falling sick fast. The healthcare services were overwhelmed,” he said.

Comparing the first and second waves, he said cases were predominantly rampant among the elderly population with co-morbidities in the first wave. They were at high risk and bore the brunt of high mortality.

“The situation is completely different in the second wave. We are seeing a huge population in the 30-40 age group getting affected, and a lot of deaths in that group. We rarely saw deaths in those aged less than 40 in the first wave. We rarely saw COVID-19 pneumonia in the young in the first wave. This took us by surprise in the second wave as young persons with no comorbidites and supposedly strong immunity were affected,” he said.

“There is no doubt that the virus has mutated,” Dr. Ebenezer said. “As a result, it has become more virulent, and is affecting younger people. The majority of the deaths are due to severe COVID-19 pneumonia with respiratory failure, termed adult respiratory distress syndrome.”

‘Too late for some’

Dr. Theranirajan added that many did not seek medical help in time. “Many came to the hospital on the third to fifth day, and this was too late for some patients. Most of them who came earlier recovered well with treatment.”

At the RGGGH, which conducts a daily audit of COVID-19 deaths, doctors also noticed that many younger persons with central obesity — abdominal obesity — were affected. “There was rapid progression of pneumonia, probably due to virus mutations. In people with central obesity, the lung space is occupied, reducing the vital capacity of the lungs. As a result, such patients who came in late faced the risk of developing respiratory failure, and death. Those who came in time recovered,” Dr. Theranirajan said.

R. Jayanthi, Dean of the Government Medical College Hospital, Omandurar Estate, said that in the first wave, 80% of the patients were asymptomatic and 20% symptomatic.

“It was the other way round in the second wave. Hypoxia, fast-spreading infections and families getting affected characterised the second wave. The number of people requiring hospitalisation and oxygen support was high,” she said.

There was very gross involvement of the lungs, and “people turned hypoxic in no time,” she said. As a way ahead, doctors stressed the need to ramp up vaccination to prevent a third wave.